Ganesha, who sees Akhilandeshwari's car moving towards his house, informs Parvathy about their arrival. She gets thrilled after knowing about it. 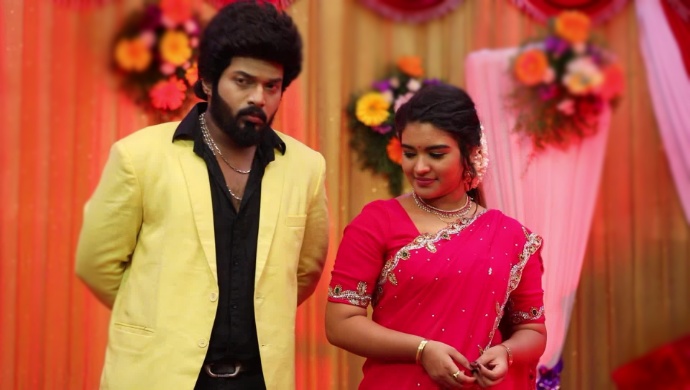 If you are wondering what Adithya will do to bring Parvathy back to the city, then here’s the answer for you. In today’s episode of Sembaruthi, Purushothaman reminds Akhilandeshwari of her promise to Sundaram after she constantly keeps thinking about him and Parvathy. To know how today’s episode unfolded, read on.

Vanaja, who doesn’t want Akhilandeshwari to bring Sundaram back to the mansion, tries to divert her attention. But she fails miserably in her attempt. Akhilandeshwari makes it obvious that she isn’t happy about Sundaram’s decision to leave for his village all of a sudden. When she sits in her room thinking about the chain of events that led to Sundaram’s exit, Purushothaman tells her that she can never get Adithya married if she doesn’t fulfill the promise made to Sundaram. By saying so, he reminds her of her commitment to help Sundaram find a suitable match for Parvathy.

Akhilandeshwari, who knows that the Adhikadavurs never break their promise, decides to visit Sundaram’s village. Though she doesn’t disclose the purpose of the visit, she asks Purushothaman, Arun and Adithya to join her. Meanwhile, Sundaram visits the temple to pray for Parvathy’s marriage. He hopes that he is able to find a groom for Parvathy at the earliest. With folded hands, he prays to the deity to fulfill his wish by sending the right man for Parvathy. When he steps out of the temple, he is pleasantly shocked to see Akhilandeshwari, Purushothaman, Arun and Adithya.

He convinces Akhilandeshwari that he is happy in his village and his confession relieves her of the guilt. But Purushothaman gets disappointed after realising that Akhilandeshwari may not ask Sundaram to return. After meeting Sundaram, when Akhilandeshwari boards her car, he requests her to visit his humble abode for lunch.

Ganesh, who sees Akhilandeshwari’s car moving towards their house, informs Parvathy about their arrival. She gets thrilled after knowing that she will get a chance to see Adithya. But will Akhilandeshwari ask Parvathy and Sundaram to return with them? Stay tuned to this space for the latest updates and for more entertainment, watch Sathya, the love story of a tomboyish girl.