As Adi returns home, Vanaja breaks the news of Akhila planning to get him married to Parvathy. What plan is she scheming now? 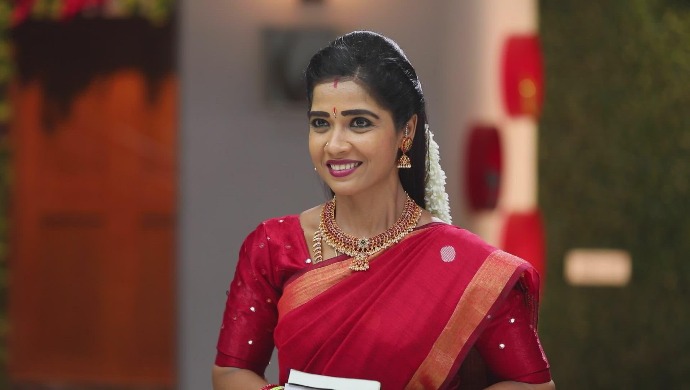 In the previous episode, Aishwarya informs Parvathy about Akhila’s decision to get Adi married to Mithra on the same day as her wedding with Rishi. This puts Parvathy in a bad place emotionally, as she is certain that Akhila probably knows about her and Adi’s marriage. As Nandini wants a proper proof of Parvathy and Adi’s marriage, she puts Rishi at work. She asks him to get it out of Parvathy. Rishi meets Parvathy, as she is returning from the temple and coaxes her to go see a film with him. She refuses his offer but he doesn’t take no for an answer. Furious with his behaviour, Parvathy walks away and just then, Rishi holds her hand and doesn’t let go.

Tonight, Parvathy tries to get away from Rishi’s grasp but he refuses to let her go. He keeps bugging her to reveal what she finds wrong in him and why she doesn’t want to go see a film with him. Parvathy struggles to make him leave her hand, but he doesn’t listen. Just then, out of the blue, Rishi gets attacked as someone throws a piece of wood at him. He immediately leaves Parvathy’s hand and falls on the floor. They all turn to see who did it and Adi makes his entry, finally! Nandini quickly escapes from the scene while Parvathy has a big smile on her face. He walks up to her and they hug each other. Adi then warns Rishi to stay away from Parvathy.

Back at home, everybody is seated in the living room when Adi makes an entrance. Akhila is happy to see her son come back from his trip. Adi surprises her and everyone else by returning early. Akhila’s happiness is short-lived as the memory of him falling in love with Parvathy, starts to trouble her again. This makes her uncomfortable and her expression immediately changes. Purushottam and Arun greet Adi and he gives them presents from the trip.

Adi also gets a saree for Akhila and a watch for Purushottam. Their happiness doesn’t last for long as Vanaja asks if he got something for Parvathy as well. Everybody stares at Vanaja in anger but Adi admits to getting a gift for Parvathy too. Akhila is obviously not happy to hear this. Adi asks Pattamma to bring Parvathy home so that he can give her the present that he got for her. Parvathy is confused as Adi pretends to meet her for the first time since his return. Akhila is fuming as Nandini’s words keep running in her mind.

Everybody expects Adi to gift something small to Parvathy but are surprised to learn that he’s gotten her a platinum chain with a pendant. Vanaja tries to criticise Adi’s gift when Aishwarya tells her that the gift must easily cost more than Rs 2 lakhs! Parvathy is apprehensive about accepting the gift but as Adi coaxes her, she takes it and leaves. Mithra asks if he got something for her and Vanaja. Adi admits that he did get something and pulls out two self-help books from his bag. He then taunts them as he states that the book will help them become better individuals.

To get back at him, Vanaja says that on his birthday, Akhila has decided to get him married to Parvathy! What game is she playing here?