Sembaruthi 8 July 2019: Akhilandeshwari Glad That Her Ancestors Have Accepted Mithra

Akhilandeshwari, who visits the temple room to check the Sphatiga Mala, gets shocked to see it as it is. 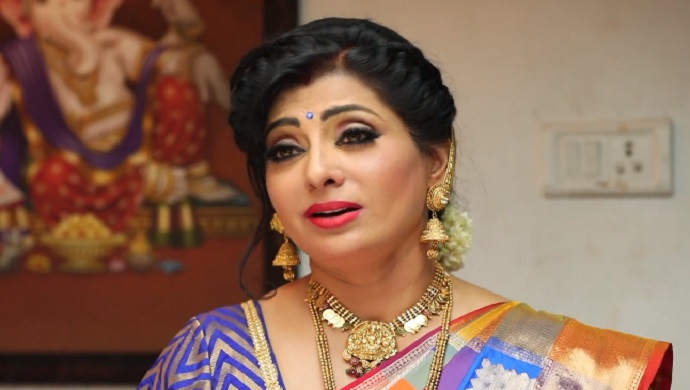 Will Vanaja reveal Parvathy was performing Munnorgal Puja in Adithya’s room? To know what happened in tonight’s episode, read on. Everyone, including Vanaja, knows that Mithra will not get blessed by the Adhikadavur ancestors. Akhilandeshwari, who had her doubts about Mithra’s dedication during the Puja, too believed that she might have chosen the wrong girl for Adithya. But what happens tonight will upset fans of Adithya and Parvathy.

Akhilandeshwari, who visits the temple room to check the Sphatiga Mala, gets shocked to see it as it is. She was not confident about seeing Mithra getting accepted by her ancestors. But she is glad that Mithra has gained their blessings and acceptance. Akhilandeshwari asks Vanaja to make the preparations for the puja to officially change Mithra’s name to Adhikadavur Mithra by performing the rituals. Vanaja gets delighted to know that she has finally succeeded in getting what she wants.

Parvathy, who is outside the temple room, is equally shocked to see the Sphatiga Mala shining in its full glory. She rushes to Adithya’s room to check her Sphatiga Mala and gets stunned to see it turn dark as charcoal. She shows it to Adithya and Purushothaman, who sense foul play. Parvathy feels sad as someone else is relishing fruits of her sincere efforts. Adithya comforts Parvathy while Purushothaman believes Vanaja or Mithra might have exchanged the Sphatiga Mala. Purushothaman feels they mustn’t delay in revealing the truth to Akhilandeshwari and leaves determined to speak with his wife.

Will Purushothaman tell Akhilandeshwari about Adithya and Parvathy’s relationship? And to make the most of the monsoon season, check out the videos streaming on ZEE5.

Planning To Get Inked Like Sembaruthi's Aishwarya? 5 Best Tattoo Places In The City To Try