Sembaruthi 8 May 2019 Written Update Of Episode: Akhilandeshwari Disturbed By The Dream

Akhilandeshwari dreams about Adithya and Parvathy's wedding ceremony and she wakes up shattered. 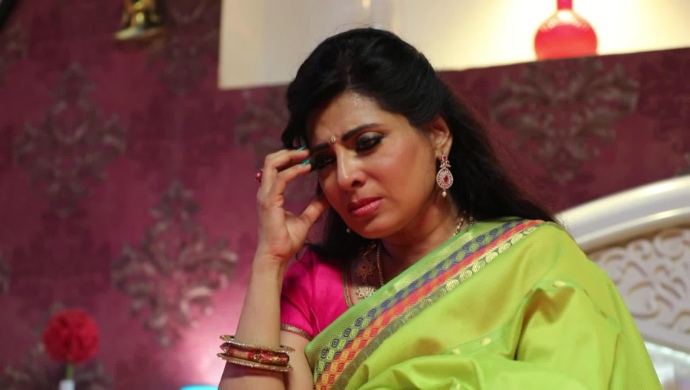 In the last episode of Sembaruthi, we see that Akhilandeshwari is not happy when she takes a look at the album of the party pictures and she loses her temper and scolds Mithra for not having stood beside Adithya in the party, as most of the photos have Adithya and Parvathy in the frame. She shouts at Mithra and walks away in anger, leaving Mithra in a state of despair. Adithya asks Parvathy to remove the name badge that she wears in the house. But Parvathy is reluctant and she fears that Vanaja and Akhilandeshwari will create a problem for it. Further, on Adithya’s persistence, she removes it. Later, when Parvathy walks in without wearing the badge, Vanaja shouts at her for not wearing it. In her anger, she goes to slap Parvathy but Adithya comes and stops her.

In today’s episode, we see that Adithya is angry with Vanaja and he also is irritated with Parvathy’s silence. He asks her as to why she is quiet when Vanaja questions her about the badge. But while he is saying all this, Akhilandeshwari stands on the upper floor and listens to everything that he has to say. Parvathy who sees this slightly hints to Adithya about it and he slyly changes his tone and content and says that he has asked all of them working in the kitchen to not wear a badge.

Later, when Akhilandeshwari walks down and meets him, he informs her about his decision and asks her if he has done the right thing. When she agrees to it, he walks out and leaves for his work. But Vanaja and Mithra are confused by his behaviour. Incidentally, Vanaja explains to the others that she is happy that Akhilandeshwari did not react when Adithya was saying things about the servants. Because she feels that Akhilandeshwari is disturbed by Adithya’s behaviour and she will soon react upon it.

Meanwhile, Adithya and Shyam happen to meet Deepak on the road but they soon realise that there is something amiss about him and they soon take him to the hospital. In the hospital, Adithya gets to know about the drug that is creating an issue with Deepak’s memory. Adithya asks the doctor to help him to get Deepak back to a normal state. Adithya also realises that Deepak’s condition is Nandhini’s doing.

Later that night, Akhilandeshwari dreams about Adithya and Parvathy’s wedding ceremony and she wakes up shattered. She is worried about this dream and cannot understand as to why she dreamt of such a thing. And the next day to the images from the dream keeps haunting Akhilandeshwari. In this worry, she calls up Sundharam and asks him to bring Paravthy’s horoscope.

So, what do you think will happen? Will Akhilandeshwari realise that her dream has already come true?

Watch Yaman, A Man's Quest To Avenge His Father's Death

Sembaruthi 8 May 2019 Preview: Akhilandeshwari Dreams Of Parvathy And Adithya's Wedding