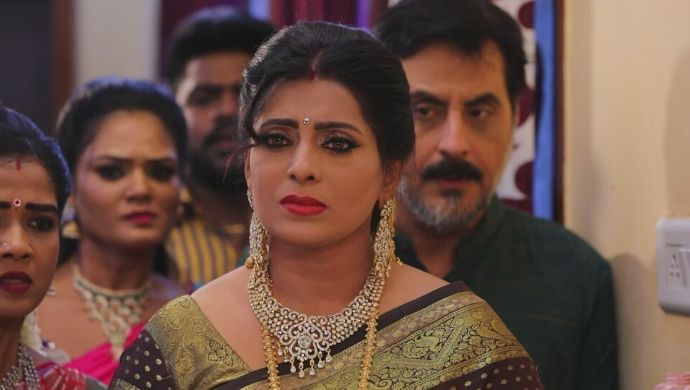 In the previous episode, Mithra challenges Parvathy to do the chandra darshan puja with Adithya since Akhilandeshwari will make sure that the puja happens in front of her. Parvathy accepts the challenge and tells her that if she wins, Mithra will have to leave the house. Adithya walks into their conversation and scolds Parvathy for speaking to unnecessary people.

Mithra is fuming and tells Vanaja  about Parvathy’s challenge and how Adi locked himself with her in the room. Vanaja comes up with a plan to expose them. Downstairs, everyone is waiting for Adi and Vanaja indirectly tells Akhila that even Parvathy is missing. This makes Akhila very angry and she scolds Vanaja. She also decides to go up to Adi’s room to find out the truth. The entire house follows her.

Parvathy is freaking out in the room but Adithya asks her to wait silently. After making everyone a little anxious, Adi opens the door, asks Parvathy to hide behind the door and makes an excuse about attending to an international call. They leave for the chandra darshan puja. Vanaja and Mithra stay back wondering where Parvathy could be. Vanaja asks Mithra to go with Adi and searches for Parvathy in the room. She finds her hiding behind the door, drags her outside and throw her out of the house.

Parvathy is upset and cries about the whole thing. At the roof, the women are waiting eagerly to catch a glimpse of the moon. Akhila asks Adi to hold the puja plate so Mithra can light the karpooram on it. Adi keeps moving the plate and a couple of them fall on the floor. As fate would have it, when she drops the lit match on the floor, the floor karpooram also lights up. Mithra steps on it by mistake during the puja and somehow throws the plate away. She hurts her foot and her eyes since some of the kumkum goes in her eyea.

Meanwhile, the betel leave that has kumkum on it falls on Parvathy’s forehead. She also catches a glimpse of Adi and the moon, both, in the reflection from a barrel of water kept outside the house. For more such entertainment, watch Iniya iru Malargal streaming on ZEE5.

Super Mom 2 First Look: Archana Chandhoke And Zaara Gear Up For Another Season Of The Show