Arun succeeds in foiling Vanaja's plan. He tells a story that puts Vanaja in the black books of Akhilandeshwari. 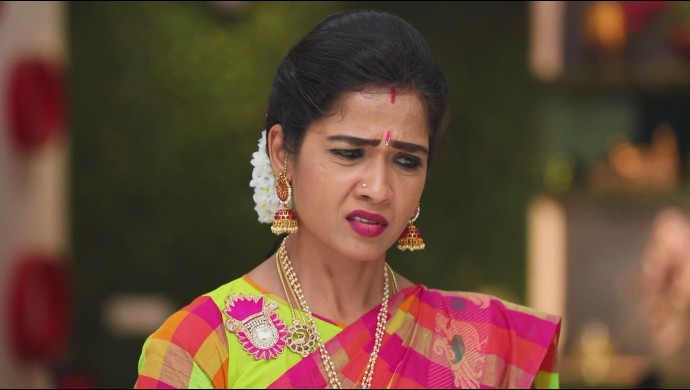 In the previous episode of Sembaruthi, we saw Adithya and Parvathy doing a photo shoot in the garden because the latter became a brand ambassador after winning a contest. Seeing this, Vanaja rushes off to show Akhilandeshwari this scene of the two of them together. Scroll below to read what happened in the latest episode.

If you missed watching the previous episode, you can catch it here.

As Vanaja leads Akhilandeshwari towards the garden, Arun intervenes. He tells his mother that he has some important information regarding Vanaja. He then points out that Vanaja has been using the company expense account  to buy expensive jewellery worth Rs 10 lakhs and also using it to buy all her essential needs online.

Squirming under Akhilandeshwari’s angry gaze, Vanaja tries to explain her way out of it, but remains unsuccessful. As Akhilandeshwari starts berating her for her mistakes, Mithra walks in from the garden. Vanaja looks at her and realises that the shoot is over and now she has lost the opportunity to expose the couple.

Meanwhile, Parvathy returns to her room after the shoot, only to find her father waiting for her there. Her father looks extremely angry and tells her that he spotted her and Adithya together in the garden. Since her father is unaware of the real nature of their relationship, he thinks that his daughter to trying to trap his employer’s son into an unequal marriage. He thinks she is better off concentrating on her cooking and insists that Parvathy step down as brand ambassador. To his surprise and fury, Parvathy refuses and walks away.

For those who may have missed the last few episodes, here’s what you should know. After Parvathy saves Akhilandeshwari from an attack by goons sent by Nandini, the lady undergoes a transformation. She and Parvathy develop a bond and she even starts behaving pleasantly with everybody. Surprised, Adithya and Parvathy think that perhaps the time has come to tell Akhilandeshwari about Adithya’s secret marriage to Parvathy and the circumstances that brought about it. For more such entertainment, watch Poove Poochoodava, streaming on ZEE5.

Watch Sigai, A Gripping Tale About One Pimp's Search For His Sex Worker

Yamuna Chinnadurai Is A Multi-Talented Personality, And Here's Proof

#WisdomWednesday: Parvathy Of Sembaruthi Tells Us The Perfect Mantra For Life