As Adi tries to stall his wedding with Mithra for some more time, Akhila cuts him off and proclaims that she won’t change her decision. 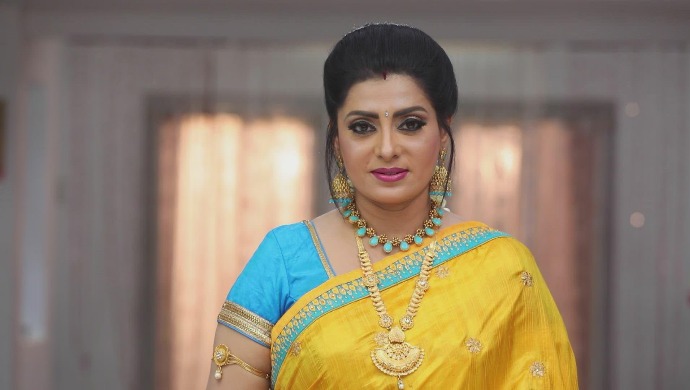 In the previous episode, as Parvathy is being harassed by Rishi on the street, Adi comes to her rescue. He throws a piece of wood on Rishi and warns him to stay as far as possible from Parvathy. Adi reaches home and starts distributing gifts to his family members. Vanaja asks him if he got something for Parvathy. To this, Adi calls her and hands over an expensive platinum chain with a pendant. Everybody is shocked to see this but Adi remains casual. To create drama, Vanaja tells Adi about Akhila’s announcement. However, she mixes up the names and states that Adi will get married to Parvathy instead of Mithra.

Tonight, Vanaja explains why she was talking about Adi and Parvathy’s wedding. Basically, she justifies her slip of tongue by saying that Adi and Parvathy both will be tying the knot to different people. Adi looks at Akhila and states that there’s no hurry for his wedding. However, Akhila cuts him off and proclaims that her decision won’t change as she wants to see him get married. Vanaja is happy as she is able to get back at Adi for his terrible gifts. Purushottam, Arun and Aishwarya ask Adi why he didn’t take a stand in front of Akhila, when she announced his wedding.

Adi speculates that perhaps Akhila knows about his affair with Parvathy. Hence, she is trying to get him married to Mithra as soon as possible. Arun asks him about how he will stall Akhila and avoid the wedding. He realises that the only way to get out of this is to prove to Akhila that Mithra is Nandini’s sister. Purushottam confronts Akhila about Adi’s wedding and how their son is probably apprehensive about it. But Akhila states that the family’s honour is more important to her and to ensure the same, she will do whatever is necessary.

Parvathy is sitting in a park, holding the chain that Adi gifted to her. He goes to meet her and explains why he had to present it to her in front of the entire family. Adi then takes the chain from Parvathy and ties it around her neck. He tells her about Akhila’s announcement but Parvathy lets him know that nothing worries her anymore as he is back and will handle everything.

Ayesha’s Latest Dance Video Will Drive Away Your Midweek Blues

Here Are Some Gritty Crime Tales In Police Diary That Will Blow Your Mind!