Read to know what happened in tonight's episode of Sembaruthi here. 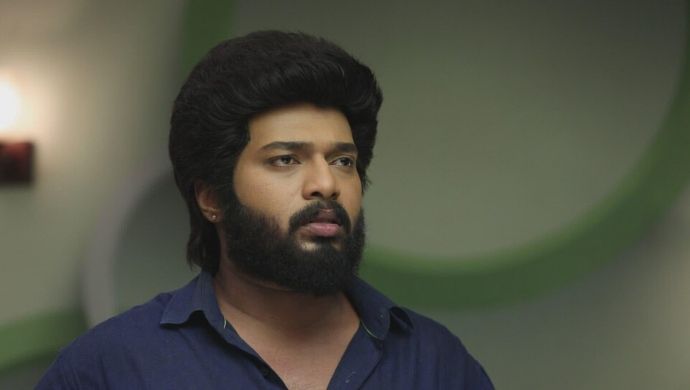 In the last episode, Vanaja throws Parvathy out of the house and shuts the door behind her so she doesn’t cause any hindrance during the chandra darshan puja. However, due to no fault of Adi’s Mithra loses her chance to do the puja with him. She steps on a lit karpooram by mistake and throws the plate away in pain. The kumkum that Adi is supposed to apply on her forehead falls on Parvathy’s head, who is sitting downstairs and crying.

Vanaja forces Mithra to see the moon but she is not able to open her eyes since a lot of kumkum fell on her face. The moon goes back in to the clouds by the time she is able to open her eyes and she misses out on the chance to do the puja. Everyone else does it and Arun even taunts Mithra about her not being lucky enough to do the puja. Akhila is upset with Mithra but does not yell at her. She asks everyone to move to the living room and everyone obliges.

She walks towards the edge of the roof and sees Parvathy below. She sees the kumkum on her forehead and fumes. Parvathy turns and applies some of the kumum on her thaali, too, but it’s not in Akhila’s sight. Vanaja is also surprised to see it. Akhila storms downstairs immediately and tries opening the door only to realise that it has been locked from inside. Vanaja says that she locked it for safety. Akhila opens the door and asks her why she was outside. Vanaja is worried if she will tell her the truth but Parvathy makes up an excuse.

Later on, Akhila is sitting in her room and pondering over everything that happened. Her alter ego appears and tells her that no one can separate Adi-Parvathy since they are meant for each other. Irritated with her internal conflict, Akhila breaks a couple of things in her room and her hand starts bleeding. Purushothaman calls the doctor immediately who tells him that she is stressed about something. Akhila is lost in thoughts meanwhile.

Purushothaman tells Adithya and Arun about the incident, leaving them worried. Adi is worried about her and says that he will tell her the entire truth on his birthday since that is the day she won’t be angry at all. He also decides to rope in Guruji in this since Akhila listens to him.

These Cute Photos Of Yaaradi Nee Mohini's Rudra Aka Baby Lisha Will Make Your Day!