Here's what happened in the latest episode of Sembaruthi. 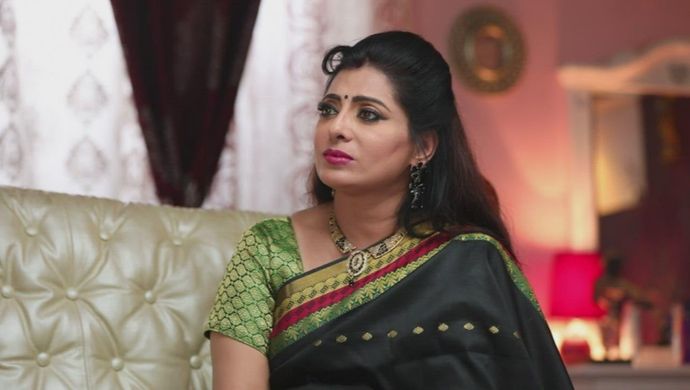 In the last episode, we saw Parvathy refusing to step down as the brand ambassador and hurting her father’s sentiments. Her father is unaware of her real relationship with Adithya and misunderstands her, thinking she is trying to trap his employer’s son. Parvathy’s strong move to disobey her father’s orders shocks him and leaves him angry. Vanaja also tries to expose Parvathy and Adithya but fails as Akhilandeshwari finds out how she has been taking money out of the company to fulfil her expensive demands.

If you missed watching the previous episode, you can watch it right here.

Parvathy’s father is angry and devastated upon seeing how his daughter has changed. He even takes it out on his son, Ganesh, who apologises to him and tries to get him to eat. Meanwhile, Arun gets a call from an old friend, Shalu, and is speaking to her as his wife, Aishwarya, walks in. A hesitant and alert Arun hands over the phone to Aishwarya and gets her to speak to Shalu, introducing the two over the phone. After the call, Arun sees Aishwarya sitting by the bed fidgeting with her phone. Worried about what Aishwarya will think, he answers another call from another woman. He hands over the phone to his wife again. She speaks to the caller and hangs up. She asks him what he is up to and he tells her that he is being careful after the whole Shailaja issue. He also assures her that no woman will ever come between them. Aishwarya tells him that she completely trusts him now and asks him to be normal.

Akhilandeshwari is lost in thoughts about her past. She is interrupted by Charu, a friend who pays her a surprise visit. They head to her room to chat. They exchange pleasantries and Charu asks her how she is doing after the accident. Akhilandeshwari confides in Charu that she is physically fit but is mentally disturbed. She asks Charu to help since she is a psychiatrist. Purushotam also walks in and joins the conversation.

Akhilandeshwari tells Charu that she constantly hears Adi saying something to her before she met with the accident but cannot make out what he is telling her. She says that she asked her husband if Adi spoke to her when she was lying unconscious in the hospital but Purushotam says that he did not. Charu says that she can help Akhilandeshwari read her subconscious thoughts clearly.

Charu begins the procedure and asks her to revisit her college days. She keeps reminding her of important days in her life. She revisits the time she met with the accident and was at the hospital as Purushotam wonders how to stop the procedure. He immediately decides to inform Adi and Arun about it.

Purushotam asks Arun about Adi’s whereabouts to inform him about Akhilandeshwari and wonders if Adi told her about him and Parvathy. Meanwhile, she recalls Adi coming to see her in the hospital room. Purushotam, in the meanwhile, plots to stop the treatment since it might not be good for Akhila. In the other room, Akhila recalls Adi telling her that he broke her trust and asks for her forgiveness for keeping a secret from her.

For the ones who missed the last couple of episodes, Akhilandeshwari and Parvathy’s bond improves significantly after the latter saves her from an attack by goons. Adithya also wonders if it is the right time to tell his mother about his secret marriage to Parvathy. For more such entertainment, watch Poove Poochoodava, streaming on ZEE5.

Sembaruthi 27 January 2020 Preview: Akhila To Keep A Pooja Before The Wedding?

#ThrowbackThursday: These Old Movie Posters Of Akhilandeshwari Will Make You Nostalgic