Here's what you can expect from tonight's episode. Vanaja, Mithra and Uma will keep insulting Parvathy by addressing her as a maid. 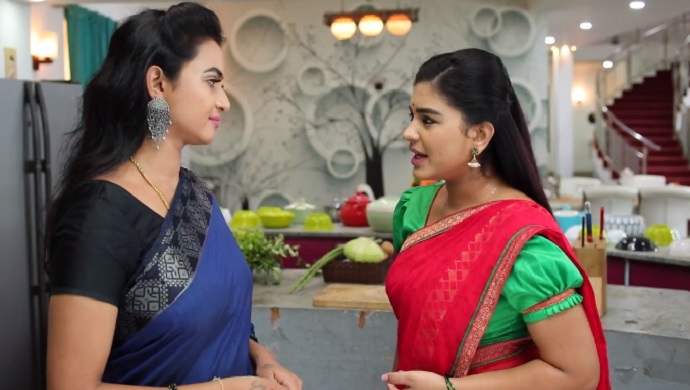 Paravthy’s presence of mind and Adithya’s efforts to expose Shailaja’s cheap antics, have helped Aishwarya sail through the toughest times of her life. In the previous episode of Sembaruthi, we saw how upset Arun was with himself for not being able to live up to Aishwarya’s expectations. And today, Aishwarya will prove that she is an ideal wife to her husband. Not just that, Aishwarya may also reveal that Parvathy is the elder daughter-in-law of the Adhikadavur household, to ensure she gets the much-deserved respect.

Here’s what you can expect from tonight’s episode. Vanaja, Mithra and Uma will keep insulting Parvathy by addressing her as a maid. Aishwarya will take offence to their behavior and confront them for humiliating Parvathy. In the heat of the moment, Aishwarya will say that they don’t know who Parvathy is, thereby leaving Vanaja, Mithra and Uma perplexed. Will Aishwarya uncover the truth to give Parvathy the respect she deserves? And if Aishwarya reveals the truth about Parvathy, how will Vanaja, Uma and Mithra react? And most importantly, what will Akhilandeshwari do?

For those who joined in late, here’s a quick flashback to the story. Nandhini hatches a plan by bringing back Arun’s former girlfriend Shailaja to his life. She intends to ruin his image and by doing so, humiliate Akhilandeshwari. But before Nandhini could succeed in her attempt to sling mud at Arun, Parvathy and Adithya save him. Aishwarya, knows that Adithya and Parvathy are her true well-wishers and she feels indebted to them for saving her and Arun every time they land in trouble.

But will she reveal the truth about Parvathy being Adithya’s duly wedded wife? Stay tuned for the written update and keep following Sembaruthi. For more entertainment, watch Yaaradi Nee Mohini, a supernatural thriller on ZEE5.

Chitra From Yaaradi Nee Mohini Is A Timeless Beauty, These Pictures Prove It