Akhilandeshwari receives a video featuring Mithra from the blackmailer and she reacts strongly after watching it. 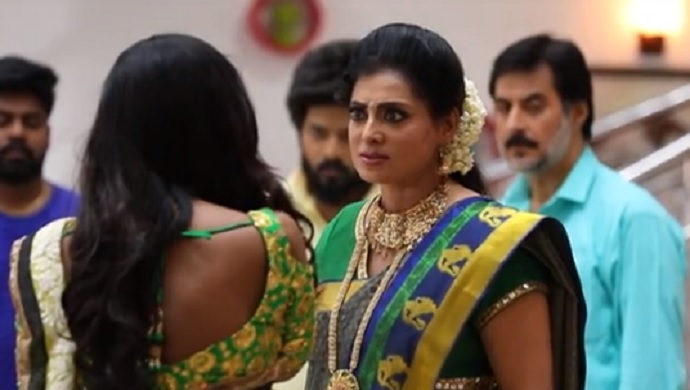 In Friday’s Sembaruthi episode, we saw two dramatic turnarounds – the blackmailer threatened to reveal the truth about Mithra to Akhilandeshwari, and Nandhini, hatched a plot with Senthil’s help to ruin Akhilandeshwari’s image and reputation. Mithra shared her fears with Vanaja who asked her not to worry because she felt the blackmailer wouldn’t approach Akhilandeshwari so soon because all he needs in money. She tells Mithra that the blackmailer only intends to extract money from her. However, Vanaja wonders who is the blackmailer and who has hired him.

We also saw Akhilandeshwari warning Mithra not to do cringe-worthy things by taking her for granted. She says that if she could choose her only based on her horoscope, then she could also reject her in one go. In today’s episode, we will see Akhilandeshwari receiving a video featuring Mithra from someone, probably the blackmailer. She reacts strongly after watching it while everyone wonders what it is but Mithra feels the jitters.

For those who missed yesterday’s episode, here’s the summary. Adi comes to know that Vanaja along with Mithra and Uma, are conspiring to reveal the truth about his relationship with Parvathi. He calls the shopkeeper who had sold the mug, to help him in his plan to accuse Mithra of a conspiracy. The shopkeeper agrees to help him and also produces a phone call recording as evidence to prove that the mug was bought by Mithra.

Interestingly, the voice recording is prepared with the help of an app to make it sound like Mithra’s voice. Thus Adi rescues Parvathi from getting humiliated and teaches Mithra a harsh lesson. What do you think will happen in today’s episode?

For more Tamil shows, check out the videos of Poove Poochoodava streaming on ZEE5.

Watch Auto Shankar only on ZEE 5.

Sembaruthi June 15 Written Update: Thatha Alerts Parvathy About A Threat To Her Loved Ones