Akhilandeshwari slams Nandhini for putting lives of kids at stake in a bid to avenge her. 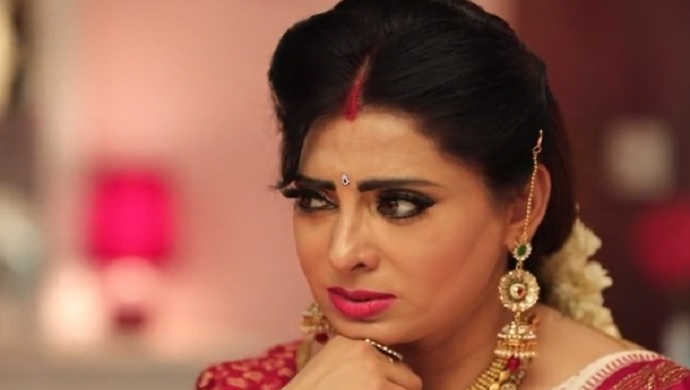 Senthil may have protected Nandhini by not revealing her name in the court but Akhilandeshwari knows who the real culprit is. After getting acquitted by the court in the adulteration case, Akhilandeshwari heads for the hospital to meet the kids affected due to the consumption of the poisonous food. But the agitated parents of the kids refuse to forgive her stating that it is no big deal for influential people like her to rid themselves of legal trouble.

After visiting the hospital, Akhilandeshwari heads to the temple to thank God for freeing her from the legal hassle and also take his blessings for the kids who are undergoing treatment. She vows not to return home until the kids are out of danger. Akhilandeshwari is no weak player. She knows when and how to make her next move to give a befitting response to her enemies. Akhilandeshwari may make Nandhini consume food mixed with the same chemical that was added to the baby food products. Nandhini chokes after eating the contaminated food but Akhilandeshwari doesn’t let her drink water stating that she deserves the same treatment. Akhilandeshwari slams Nandhini for putting the lives of kids at stake in a bid to avenge her.

For those who missed the last few episodes, Parvathy helps Adithya in finding out which of the three managers is at fault. Her idea works wonders and helps Adithya catch Senthil red-handed. Senthil confesses to Adithya that Nandhini had paid him a crore for adding chemical to the baby food to frame Akhilandeshwari in a false case. Thus, Adithya’s love and respect for Parvathy grows by leaps and bounds while Akhilandeshwari gets acquitted of false charges.