The makers of the show recently hosted a special event to celebrate the completion of 500 episodes of Sembaruthi. 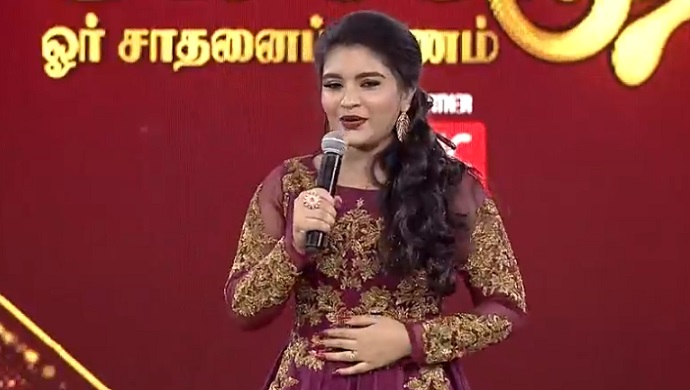 Sembaruthi, the show that has wowed viewers across the world, has not only entertained fans but also struck an emotional chord. Sembaruthi has transformed from a TV programme to an extension of viewers’ family – such is the popularity of show starring  Karthik Raj, Shabana Shajahan, Priya Raman, Laxmi, Sanjay Kumar Asrani, Bharatha Naidu, VJ Kathir, Mounika and Janani Ashok Kumar.

The makers of the show recently hosted a special event to celebrate the completion of 500 episodes of Sembaruthi. The gala event was attended by the entire team of Sembaruthi, a host of other ZEE Tamil personalities and celebrities from the film fraternity.

Titled Sembaruthi Oru Sathanaipayanam, the event showcased the real and reel bond shared between the actors who are a part of the show. Karthik Raj, who plays Adithya, met two of his diehard fans during the special event. One of his fans is so mad about him that she has asked her husband to sport a beard. The event honoured all the people who are a part of the show and thanked them for making Sembaruthi a blockbuster on the Tamil TV space.

Most importantly, it highlighted the love and admiration Shabana receives for playing Parvathy in Sembaruthi. Shabana was moved to tears after being showered with love, appreciation and gifts by her fans. Parvathy’s admirers are eagerly looking forward to seeing Adithya and her together forever, and they have expressed their desire to witness their wedding ceremony.

If you are a true Sembaruthi fan, then you cannot miss watching the video embedded above on ZEE5 and for more entertainment, watch Yaardi Nee Mohini a supernatural thriller starring Shreekumarm Nakshatra and Chaitra Reddy.

On Sathya's Birthday, Her Enemy Hatches A Plan To Kill Her?