Sembaruthi: These Cute Moments Of Adi & Parvathy Prove That They’re Made For Each Other

Check out these cute moments between Sembaruthi's Adi and Parvathy that fans adore the most! 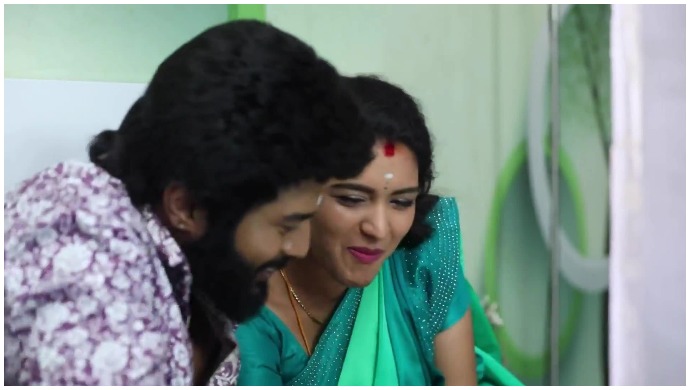 Karthik Raj and Shabana Shajahan starrer Sembaruthi is one of the most loved shows on Indian television. It is a known fact that the show has gained immense popularity because of Adithya (Karthik) and Parvathy’s (Shabana) sizzling onscreen chemistry. Adi and Parvathy’s love story began in the most unexpected way. They have gone through several trials and tribulations in the show but it has only gotten the two closer and made their love even stronger. Even, fans of the show have been rooting for them and their beautiful journey throughout.

It’s needless to say that Adi and Parvathy’s chemistry rocks on screen. Just like any other couple, these two, too, have shared some intense romantic moments together on camera. We got our hands on some of the videos of Adi and Parvathy from their fan pages on the photo-sharing app to share with the audience. Take a look!

This is one of our personal favourite. As we know, before Akhilandeshwari knew about Adi and Parvathy’s secret marriage, Adi used to meet his wife like this. But the best part is the little ways in which Adi made Parvathy smile. Despite his busy work schedule, Adi never fails to make time for his wife Parvathy. While he can’t publicly accept her in order to not hurt his mother’s feelings, he makes sure to keep his wife happy by making time for her. Another admirable quality of Aditya is that he never fails to acknowledge the fact that Parvathy’s presence in his life has changed things for him in a better way.

Remember the time when Adi was too busy working on an independent project that he needed to submit on a priority basis? Well, Parvathy, who notices that Adi has skipped his meal due to his work commitments, feeds him. Adi too knows his wife well enough to realise that she must have not eaten anything either. So, he feeds her too. This is definitely one of the many favourite scenes of the adorable couple.

It’s always good to see a man stand by his wife’s side. While Adi loves his mother immensely, it never made him compromise his love for his wife Parvathy. It’s a well known fact that Akhila hates having Parvathy as her daughter-in-law but that has never stopped Adi from loving her or standing by her side or making her feel important and special. In this scene, when Parvathy hesitates to sit at the same breakfast table as Akhila’s, Adi made Parvathy realise that she is the daughter-in-law of the house and she deserves to be respected. Fighting for his wife’s rights in the house surely made us love Adi even more. Any girl who is not accepted by her mother-in-law yet will surely relate and know how amazing it feels to have a husband like Adithya. This one deserves to make it to the list of Adi-Parvathy’s adorable moments.

Also, when Parvathy tells him that he does not have to fight for her rights, he tells her he will do anything for her. We are sure, most of you felt the love between them. However, it makes us wonder if men like Adi exist.

Adi always manages to guess if his wife is sad or worried or tensed. He then hugs her and gets that emotion out of her system. The two surely give us all couple goals. Adi knows how to make his wife smile.

This particular scene proves that there is nothing more important to Adi than taking care of his wife when she needs him the most. Right from staying back in the hospital to taking care of her eating habits, Adi did all he could to make her recover. After getting discharged, Adi also tells her that he can never imagine a life without her. That aww moment!

Also, to see Adi taking time out of his busy schedule to teach his wife and wanting her to learn and grow in life, it’s just too impressive. We are sure, girls out there are jealous of Parvathy to have been blessed with someone as good as Adi. Also, the fun they have while Adi is teaching her makes our hearts lighter.

Adi just can’t stop gazing at his wife and this video is proof. He just wants her around all the time.

For those who have just started watching Sembaruthi as a means to beat the boredom of coronavirus isolation, here are some important details you should know about the show. Adithya, the heir to a rich family, is secretly married to Parvathy, his household cook. The biggest obstacle to their happiness is Adithya’s mom, the strict and demanding Akhilandeshwari, who has different notions of what her daughter-in-law should be like. She has no idea about her son’s marriage, and Adithya and Parvathy are waiting for the right moment to tell her. Meanwhile, Akhila’s plans to get Adi married to Mithra fails as she learns about her identity. As the wedding is now called off, Adi confesses to his mother about his marriage. On learning the truth, Akhila refuses to accept this marriage. Will Akhila ever be able to accept Parvathy as her daughter-in-law?

Tell us which one is your favourite among these in the comment section below. And, if you love to watch Tamil dramas, you can check out Sembaruthi on ZEE5.