Semburathi 4 October 2019 Written Update: Adi To Tell The Truth To Akhila At Wedding

Adithya plans to tell the truth about his marriage to Akhilandeshwari at a wedding, but Vanaja has other plans. 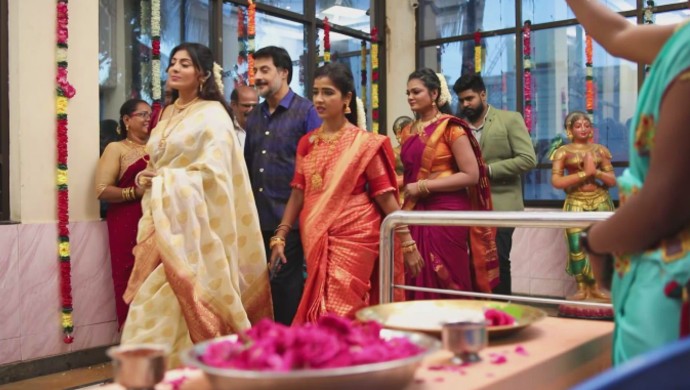 This episode of Semburathi opens with Adithya coming home with an injured wrist. When Parvathy insists he explain how he injured himself, he reveals how his car was attacked by goons and he had to defend himself. Upset and scared, Parvathy feels that Guruji’s prediction is coming true. She pleads with Adithya that he should stay in London until pournami, by which time he would be well clear of the danger, as predicted by the Guruji. Scroll down to read how the rest of the episode unfolded.

But Adithya refuses to do. He points out that it was not him, but his mother, Akhilandeshwari, on whom attacks were planned thrice. In fact, suspecting something afoot, he switched cars with his mother and thus, was at the receiving end of the third planned attack when he fought off the goons. He ended the conversation by saying that he can handle anything that comes his way, but his mother cannot. So he will remain by her side.

Meanwhile, Adithya’s brother Arun and his wife Aishwarya feel bad about Parvathy and Adithya marital situation and plan a secret honeymoon for them, unknown to Akhilandeshwari. But both Parvathy and Adithya refuse to take part in the plan saying that they could not go ahead with it without first telling Akhilandeshwari about their marriage and getting her blessings for it.

The next day morning, Akhilandeshwari and her family head off to attend a wedding, during which time, Adithya and his father, Purushothaman, had planned to sit her down and tell her about her son’s marriage to Parvathy. But Vanaja doesn’t want things working out so easily for them and starts to hatch another scheme? Will Vanaja succeed again? Will Adithya be able to tell the truth to his mother? For more updates to the love story of Adithya and Parvathy, keep watching Semburathi on ZEE5. And if you like such family dramas, then do check out Poove Poochoodava, also streaming on ZEE5.

Sembaruthi 4 October 2019 Preview: Adithya Refuses To Leave His Mother’s Side