Gear up to get your funny bone tickled this Friday by watching Silambarasan's action-comedy flick Vantha Rajavathaan Varuven. 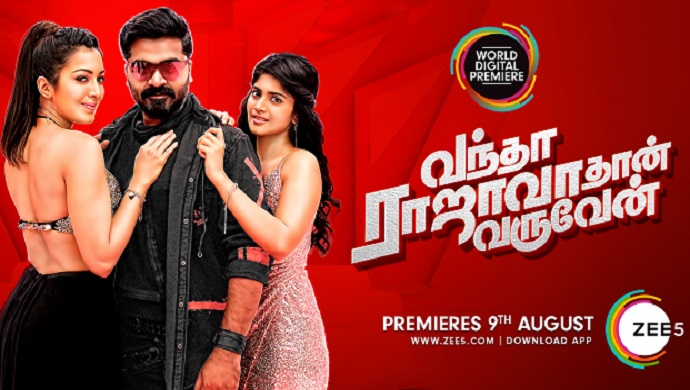 Dear fans of ZEE5 here’s something special for you that’s going to make your Friday a super-entertaining one. Your favourite platform is all set to present to you one of the recently released Tamil films Vantha Rajavathaan Varuven starring Silambarasan in the lead role. So, get into the weekend mode, waste no time and mark your calendar for watching the typical masala entertainer loaded with action and comedy. Check out the trailer of the film embedded below to know what is in store for you.

Watch the trailer below!

The title of the film – Vantha Rajavathaan Varuven – clearly reflects Simbu’s “king-like” attitude. He has a task at hand, and he will experience a comedy of errors while completing it.

The story revolves around Adithya / Raja’s efforts to fulfil his grandfather’s (Raghunandhan, played by Naseer) most cherished wish. Raghunandan wants to reunite with his daughter (Nandhini, played by Ramya), who he had disowned after she married Prakash (essayed by Prabhu), a man of her choice. Nandhini has two daughters Maya (Megha Akash) and Priya (Catherine Tresa). How Adhi convinces Nadhini to reconcile with her father, forms the crux of the story.

For the unversed, VRV is a remake of super-hit 2013 Telugu film Attarintiki Daredi starring power star Pawan Kalyan and Samantha Akkineni. This Simbu flick has music composed by Hiphop Tamizha. So you can look forward to listening to the peppiest tracks.

Now, be ready to get your funny bone tickled tomorrow as the film premieres on ZEE5 today!

And if you are a fan of Tamil Original Series, watch Postman exclusively on ZEE5.