Simba And Mahesh’s Hilarious Conversations Aren’t To Be Missed, Check Out

Simba stars Bhanu Shri Mehra as Madhu as the leading lady of the film who makes Mahesh go head-over-heels. 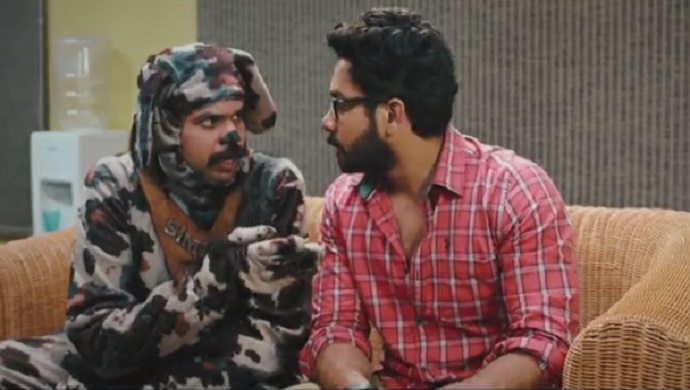 Simba, Tamil Cinema’s first stoner comedy film starring Bharath and Premgi Amaren in the lead roles, showcases the unusual bond between a man and his neighbour’s pet dog. Mahesh plays a drug addict, who befriends his neighbour’s dog named Simba after he falls in love with his owner Madhu. Whenever Simba is home alone, he likes to hang out with Mahesh, who finds someone to talk to, after years of living in loneliness. Since Mahesh is always high, Simba appears like a human being to him, and the conversation between the two reflects the bond they share.

Watch the scene below to see what Mahesh does to Simba:

To know why Mahesh makes Simba undergo a birth control surgery, watch the film on ZEE5.

Here’s a sneak peek into the lives of Simba and Mahesh – The story revolves around a man named Mahesh, who takes to drugs after losing the battle to loneliness. He lost his parents when he was very young. His grandfather raised him and showered him with much love and affection. But after his grandfather dies, Mahesh gets aimless in life.

He remains confined to the world of delusions and stays in a dark and dingy independent bungalow. He somehow manages to do his job and gets back home to continue living as a loner. Simba’s arrival brings all the changes to his life. Simba stars Bhanu Shri Mehra as Madhu as the leading lady of the film who makes Mahesh go head-over-heels.