Vijay Sethupathi starrer Sindhubaadh is worth a watch because it entertains as well as educates. 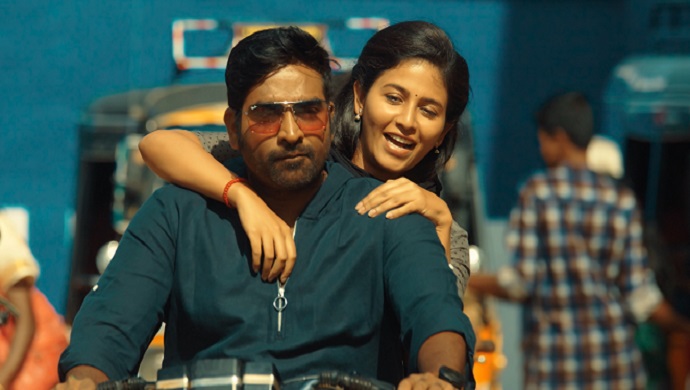 Human trafficking is not a new problem. Over the years, we have all heard whispers of it, read stories of raids and rescues in newspapers. But very few people know what actually happens to the victims who fall through the cracks into the seedy underworld of human trafficking. Vijay Sethupathi’s Sindhubaadh exposes the chilling realities of the flesh and skin trade with an all too realistic depiction of how the illegal “industry” thrives.

The film revolves around smalltime thieves, Thiru (Vijay Sethupathi) and his sidekick Super (Surya Vijay Sethupathi). Although their chosen profession isn’t strictly legal and the morality of it is definitely iffy, they did, however, have their own code of ethics. For instance, they refrained from targeting women and senior citizens. This proves that they are thieves with their hearts in the right place. Thiru and Super had no one else in their lives except for a distant relative who kept visiting them now and then.

Besides Super, if there’s anything dear to Thiru, it is his father’s house. He refuses to sell the house even after repeated requests by his uncle, who wanted him to make good money out of it. But Thiru kept giving lame excuses to drive his uncle away.

His life, however, transforms when he bumps into a girl called Venba. Interestingly, Thiru has hearing issues, and he falls in love with Venba, who has the habit of talking aloud. Thus, they effortlessly complement each other. Venba’s presence changes Thiru, and he vows never to steal again. He promises that he will give up his old habits and start life anew. However, circumstances compel Venba to move to Malaysia, and she leaves the country, unware of the fact that she has been duped and that she is being trapped into joining the skin trade. Upon hearing the news, a shocked Thiru takes on a new avatar to free Venba and several others from the clutches of Ling, the kingpin of the flesh and skin trading network.

Postman: Highlights Of The First Five Episodes Of The ZEE5 Series

The film serves a dual purpose of being an entertainer as well as an eye-opener. Some of the scenes in the first half will tickle your funny bone, and the filmmaker has done complete justice to it. And the actors have done a fabulous job. The second-half mostly given over to gripping action sequences that will make your jaw drop. However, some of the visuals that describe the grim realities of skin trade are disturbing.

Overall, the film is a complete entertainer. Do watch it on ZEE5 with your friends and family and for more entertainment, check out Fingertip, an Original series.

#ThursdayThoughts: Durga Of Piriyadha Varam Vendum Will Tell You How To Succeed in Life