Sneha Prasanna Looks Angelic In Her Pregnancy Photoshoot – Check Out Her Pictures!

Sneha and Prasanna welcomed their baby girl on January 24. They have now shared photos from their pregnancy photoshoot, on their social media. 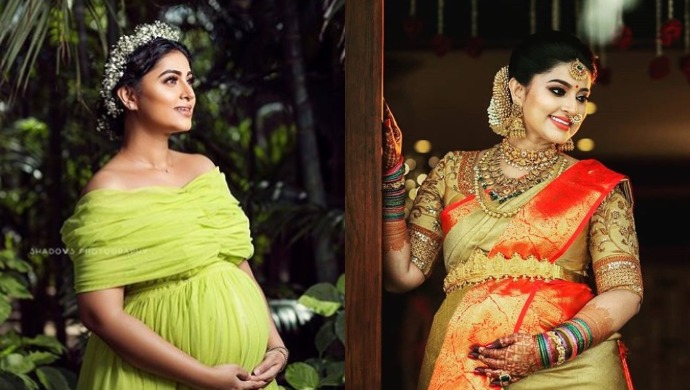 ZEE5 turns 2 this week on February 14 and to celebrate our two years of success, we have decided to provide you with content that epitomises 2xthelove. Actors Sneha and Prasanna have also found within themselves 2xthelove to give after they welcomed a new addition to their family – a baby girl born a couple of weeks ago. The two stars shared the news in an adorable manner as they put up a picture of pink booties placed on a cushion and captioned the news on their respective social media accounts. Needless to say, fans and industry friends quickly flooded the two actors’ inboxes with well wishes. Interestingly, back then, Prasanna had revealed that the couple would soon release pictures of their pregnancy photoshoot.

Now, they have blessed us in February, the most romantic month, with photos from their shoot. Both Sneha and Prasanna have taken to their social media accounts to share photos from the shoot they conducted at the time when she was expecting. Right from solo pictures of Sneha looking angelic in lovely gowns and sarees, to Prasanna holding her belly, the shoot pictures will invoke ‘awws’ and ‘so cutes’ from you! Check out the posts below where Sneha and Prasanna share their 2xthelove.

Sneha looking ethereal during her valaikappu

As the tradition goes, sometime after the second trimester of the pregnancy, a valaikappu ceremony is conducted where the expectant mother is showered with love and made to wear numerous, multicolored glass bangles. Basically, it is a baby shower. For the same, Sneha chose to wear a beautiful golden silk saree with an orange border. The look is practically perfect.

A closeup of Sneha’s face at the valaikappu

Draped in gold jewellery sets, Sneha looks divine in the photoshoot. Not to mention the contagious smile that she possesses!

An adorable picture of Prasanna and Sneha together

Get yourself a man who looks at you the way Prasanna does! There’s so much love between them and this picture is a testament to the same.

Angelic is the word for this image

Last week this time an Angel came in to my life n made my life even more beautiful. I thanq everyone for showering us so much love. More pic coming soon #pregnancyphotoshoot #babybump #maternityshoot Photo: @shadowsphotographyy Wardrobe: @geetuhautecouture Makeup: @vijiknr Hairstylist: @hairytale_by_komal Location: #GRTtemplebayMahabss

Thank u everyone for those lovely wishes😍😍all your wishes made it a lot more special! thanks to @shadowsphotographyy for this wonderful pic. more from Sneha's pregnancy photo shoot is coming .

Sneha, Prasanna and their son’s family picture as they welcome the newest member, is so pure and poignant! Don’t they make a happy family?

Although the couple hasn’t announced the name they have given to their baby girl yet, perhaps another photoshoot picture might reveal the same. On a professional note, Sneha recently received tremendously good reviews for her portrayal in Dhanush’s Pattas. The actress also judged Dance Jodi Dance’s third season. Meanwhile, Prasanna has kept himself busy with movie projects as well as ventures on the OTT platform. He will soon release the first look and details of his upcoming project, Mafia.

Prasanna stars in ZEE5 Original’s Thiravam as Ravi Prakasam. The film also stars Indhuja, John Vijay and Kaali Venkat in pivotal roles. The series follows the life of a small-time scientist, who claims to have invented a ‘herbal fuel’ and focuses on the setbacks that he faces for the same. In the series, Prasanna is seen sporting grey hair and a paunch, to bring more authenticity to his role. He has been praised for his earnest performance as critics have stated how he is the perfect choice for the role of a scientist.

Appani Sarath Is Horrifying As The Heinous Criminal In Auto Shankar!

Parvathy And Adi's Romantic Moments In Sembaruthi Will Make You Go Weak In The Knees!