Krithikaa is just as smiling and fun-loving as she is depicted in the show but she is also a responsible mother to a child. 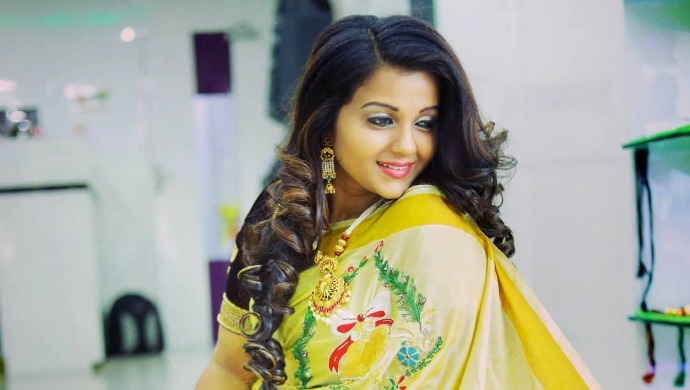 Poove Poochoodava is a series that has been entertaining the viewers for some time now. This show which only recently completed its two years and six hundred episode journey have developed a certain sense of fond feelings in the minds if the audiences. Thus, each and every aspect of this series starting from its characters and plot structures has a unique influence on the viewers.

Watch the conflict and struggle in the series Poove Poochoodava.

Now the basic story of the show is woven around Shakti (Reshma) and Shiva (Dinesh) but there are other characters who also play an important role. Meenakshi is one such character whom we see playing a crucial part. The character of Meenakshi is essayed by actress Krithikaa Laddu. In the show, Meenakshi is Shakti’s elder sister and is also married to Shiva’s stepbrother Sundhar.

Krithikaa is just as happy and fun-loving as she is depicted in the show but she is also a responsible mother to an adorable girl. Her daughter Shrika is her world around which she has built the happiness and love. We have seen Krithika and Shrika in Super Mom, hosted by Archana Chandhoke and her daughter. Even the actress’s  Instagram page is filled with her daughter’s cute pictures which shows how much she loves her daughter. Seeing these pics will make you call your mom right now!

So, here are some of the cute pictures of Shrika.

These pictures definitely are a cute visual treat but apart from that, these also show the bond that they share.

Poove Poochoodava’s Shiva Is Unlike His Onscreen Character In Real Life,…

If You Wish To Buy Sarees Like Sembaruthi’s Akhilandeshwari, Head To These…

So, which among these posts is your favourite one? Share your thoughts with us in the section given below.

Also, if you like watching more such drama series, watch Sembaruthi streaming on ZEE5.

Ayesha Twins With Her Sister in Baby Pink, Looks Like A Princess - Check Out Pics