These Videos Of Shruti Haasan Performing In London Clubs Will Amaze You!

Shruti Haasan took a brief sabbatical from her film career to focus more on her music. During her stay in London, she performed at several clubs. 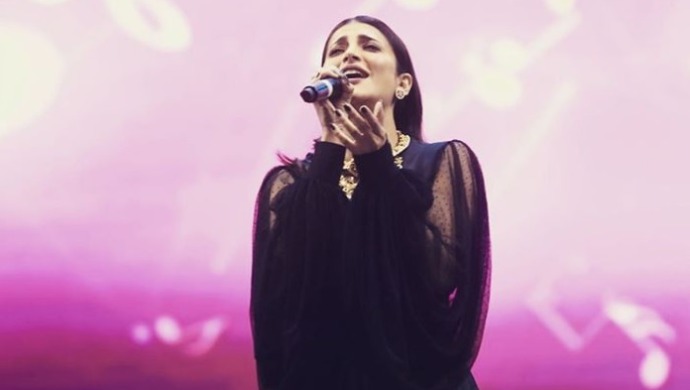 Actress Shruti Haasan is back and how! The diva took a brief sabbatical of one and a half years to focus on her career as a musician. It is a known fact that Shruti is a talented singer and music composer. Right after wrapping up all her films in 2017, with Si3 being her last film, Shruti flitted off to London, to pursue a career in music by composing new songs and collaborating with other artists.

During her break, the actress traveled through the city and performed at several clubs too. In fact, she got the opportunity to perform several of her original compositions! Shruti did share glimpses and videos of her shows on Instagram, expressing how happy she is about getting a chance to perform in front of a crowd and for its good reception! Scroll below and check out some of her performances.

Shruti crooning to the tunes of Bury Me

As part of her sabbatical from films, Shruti spent a lot of her time, composing new music and songs. This is one of them.

When she performed at The Half Moon, Putney

One of my favourite shows in London 🖤 had the best time !!! Already missing it so much !! Can’t wait to be back SOON !!

For the uninitiated, the Half Moon is a prominent rock ‘n’ roll pub, where bands like the Rolling Stones, U2 and The Who, have performed. So, Shruti performing there is definitely a big deal!

Shruti and her entourage of talented artists!

Had such a fun night performing with the super talented ladies @zosia_music and @tinakeyboards for the @beastmag_london ❤️who are the loveliest people in east London !!Thankyou @ashantiomkar for the vid and the constant support through the years 🙏🏻 see you soon at the islington !! 1st December ticket link in bio

The actress/musician teamed up with two talented ladies, to perform with her, during her stay in East London.

Shruti Haasan stars in the third part of Singam, called Si3. She plays Vidhya, a journalist, who is tailing him for a story, by pretending to be a college student. For the movie, Suriya and Anushka Shetty reprise their roles as Durai Singam and Kavya Mahalingam. The story of the film revolves around Singam’s recent transfer to Visakhapatnam, where he is put on a murder case. Basically, he has to solve the murder of the City Police Commissioner. His murder has links to the ruthless businessman Vittal Prasad. How will he bring down the man responsible for the commissioner’s death? You can watch the full movie right here on ZEE5.

Vikram And Nayanthara's Action-packed Iru Mugan Should Be Your Next Movie To Watch! Here's Why