Swetha and Vennila are the noisiest on the sets of the show while Mutharasan in the quietest. 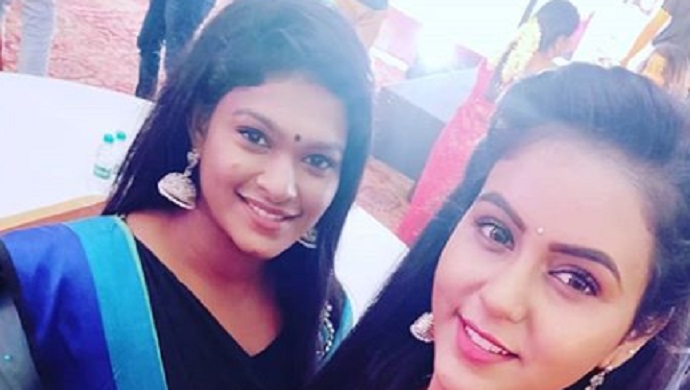 Do you want to beat the midweek blues? Then here’s a funny video of Swetha (Chaitra Reddy) and Vennila (Nakshatra) of Yaaradi Nee Mohini that will help you drive the blues away. This funny video will tickle your funny bone and help you overcome the work pressure.

Swetha and Vennila are friends in real life. They make the most of their time while shooting for the show and their Instagram posts shot on the sets of the show are proof.

Take a look at this throwback musically video:

And here we are😍 I know it's been really very long that we did musically 🤗 so sorry for the long gap 😝 we shall be active like before 🙈 I just found this one viral on #musically So tried 😋 this was coreographered in just 5 mins 🙈 hopefully it's good 😍 comment below 🤩 #tiktik#musically#ondemand#fanslove#onlyforfans💪 VC : @yamuna_chinnadurai ❤

By their own admission, Swetha and Vennila are the noisiest on the sets of the show while Mutharasan in the quietest. Interestingly, Vennila believes in the presence of ghosts and is scared about them while Swetha doesn’t believe in the existence of supernatural beings.

Chaitra, who plays Swetha, the main antagonist in the supernatural daily show, is jealous of Vennila, the female lead. Both Swetha and Vennila are in love with Mutharasan (played by Shreekumar). Swetha wants to have Mutharasan in her life by hook or crook so she goes to the extent if hypnotising him by hiring an occultist.

Mutharsan gets overpowered by the occultist’s powers and loses the memory of promising marriage to Vennila, who loves him genuinely unlike Swetha, who wants to marry him only to satisfy her inflated ego.

Yaaradi Nee Mohini is one of the most popular Tamil daily shows. What do you like the most about the show? Let us know by leaving your comment below.

Isai And Shruti From D7 Are Like A Breath Of Fresh Air, Find Out Why!