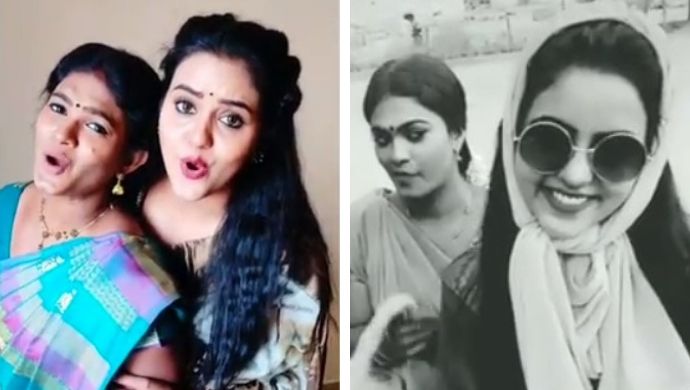 Swetha and Vennila of Yaaradi Nee Mohini may be arch-rivals on screen, but in real life, they are BFFs. The two pretty actresses make the most of the spare time while shooting for the show. They spend substantial time with each other both on and off the screen. Recently, when Swetha (Chaitra Reddy) threw a birthday bash, Vennila (Nakshatra) and her husband Tamizh were an integral part of it. In this post, we will take a look at Chaitra’s latest Instagram video that shows her shaking a leg with Vennila.

Check out the funny video below:

Just because it is Trending 🤷 @nakshathra_official

Interestingly, Nakshatra and Swetha have a different view of ghosts. Swetha doesn’t believe in the existence of supernatural beings, while Nakshatra feels spooked in darkness. She doesn’t step out of the house post-sunset if the roads are not well lit.

Nakshatra comes across as the quietest of the two, but it is she who is the naughtiest. Nonetheless, Swetha and Nakshatra make the maximum noise when they are together. Surprisingly, Shreekumar (who plays Mutharasan) is the calmest. He hardly speaks, but the two ladies who are after him on the show are complete chatterboxes. For the unversed, Yaaradi Nee Mohini is a super-hit supernatural Tamil daily soap which also has actor Murali Krish on board. The show revolves around Vennila’s unconditional love and Swetha’s obsession for Mutharasan. Swetha has hypnotised Mutharasan to deceive him to get married to her. She has thus snatched Mutharasan from Vennila, who loves him the most.

Will Vennila be able to save Mutharasan from Swetha’s clutches? Watch Yaaradi Nee Mohini to see who ends up marrying Mutharasan. And for more entertainment, watch Piriyadha Varam Vendum, on ZEE5.

Friendship Day 2019: Lessons We All Can Learn From Annamalai, Sathya and Shyam