Priya gets speechless when she learns that Kanna's mother is under the assumption about them (Kanna and Priya) being married. Read the update. 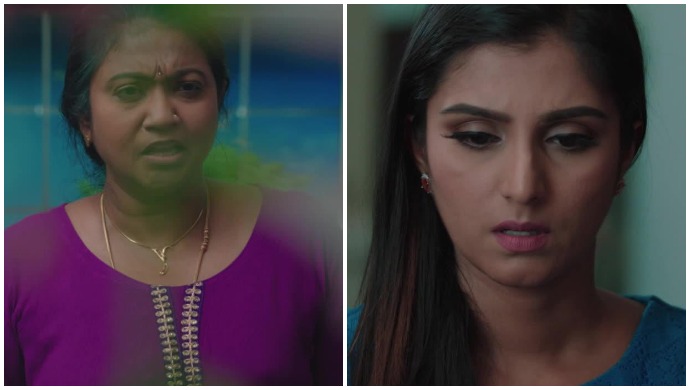 In the previous episode of Uyire – Ties that Bind, Charu tells Keerthy about Renuka staying at their house with her daughter Tara. Keerthy warns Renuka and tells her to stay away from her father Raghavan. Ashwin is elated when the doctor confirms the pregnancy but Priya seemed a bit off.

Priya, who overhears Kanna’s conversation with Ashwin and his mother, recalls a past incident with Kanna. She recollects the time when she gets pregnant with Kanna’s child and later aborts the child and leaves Kanna forever. Though Kanna tries his best to get her back in his life, he couldn’t as Priya had left the country and her father Raghavan knew all about this.

In tonight’s episode, In the flashback, Kanna goes to Priya’s house and requests Raghavan to allow him to meet her. Raghavan ridicules Kanna and tells him that Priya has left the country. Kanna gets devastated when Raghavan informs him about his Priya’s abortion. Initially, Kanna refuses to believe Raghavan but later feels heartbroken when Priya sends him a voice message saying that she has aborted the child. Priya also mentions about not being ready for the marriage with him.

In the current scenario, Priya’s boss asks her to confess the truth to Ashwin so that he can take care of the matter. Meanwhile, Keerthy goes to Raghavan’s house and talks disrespectfully with Renuka and asks her to leave. This makes Raghavan furious and he scolds Keerthy.

After work, Priya meets Kanna’s mother to reveal about her son’s actions. Priya gets shocked when she learns that Kanna’s mother is under the assumption that they (Kanna and Priya) are married. Priya blackmails Kanna that she will reveal the truth to his mother; while Kanna threatens her that he will tell everything to Ashwin. Will Priya confess the truth to Ashwin? Stay tuned!

If you are a fan of Tamil series, you must check out Poove Poochudava available in Tamil, only on ZEE5.

Arivaan - The Revelation Episode 25 Written Update: Who Is Siva Swami?