Vanaja From Sembaruthi Or Yaaradi Nee Mohini’s Shwetha, Who Do You Love To Hate?

On closer inspection, one would realise the difference that exists between the characteristics of Vanaja and Shwetha. 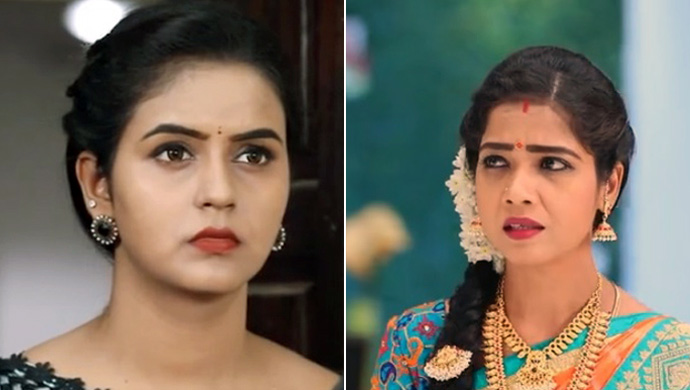 Sembaruthi and Yaaradi Nee Mohini are two of the most popular shows on ZEE5. What is it that makes these series stand out from the rest? Well, it is not just the gripping storyline and intriguing plot twists, but it is also the perfectly chiselled out characteristics of the leading antagonist that adds to the essence.

Watch the conflicts that Vanaja creates for everyone in the show Sembaruthi.

A very strong and determined female villain is nothing short of a spectacle. Moreover, if one were to closely examine the conflicts that the main antagonist from each of these show share with the leading protagonists, one would actually understand the beauty of their characterisation. Not only are these characters well created but they are also well crafted by effortless acting.

While, Vanaja, a character essayed by actress Laxmi, is a cunning villain, who wants to create a rift in the family just for the sake of her personal pleasure; Shwetha, played by Chaitra Reddy, has an ulterior motive in her defense. If one were to take a superficial glance at the characters of Shwetha and Vanaja, it would just seem that they both serve the same purpose in their distinct shows. But on closer inspection, one would realise the difference that exists very subtly in their characteristics.

Vanaja’s character is basically a projection of Akhilandeshwari’s ego which makes it easier for her to manipulate her way and control the flaws of Akhilandeshwari. Thus, whatever she does as an antagonist, she does destroy her nemesis. Even her anger with regards to Adithya and Parvathy is just a medium of her angst against Akhilandeshwari.

On the other hand, if one were to comprehend on the character of Shwetha, it would be evident from the beginning that the cause of her wrath is the weak sense of belonging, further broken at regular intervals by Mutharasan, the leading protagonist. It is this feeling of being inferior that fuels her anger against Vennila. In fact, if only Mutharasan had meted out a different treatment to Shwetha, she would have had a different perspective about things.

Thus, even though both these actors play their part well and project themselves as very strong female negative leads, we want to know who according to you plays the part of the villain better. So, share your opinions in the comments section below and vote for the best protagonist, in the voting section.

If you like watching TV shows, you can watch more streaming on ZEE5.

Will Amul Baby Go Away From Sathya's Life?

Ganesha Chaturthi: Rasathi Of Oru Oorla Oru Rajakumari Has A Surprise In Store For You