Sujeeth is a character who belongs to the middle-class background but desires to live a carefree and rebellious life. 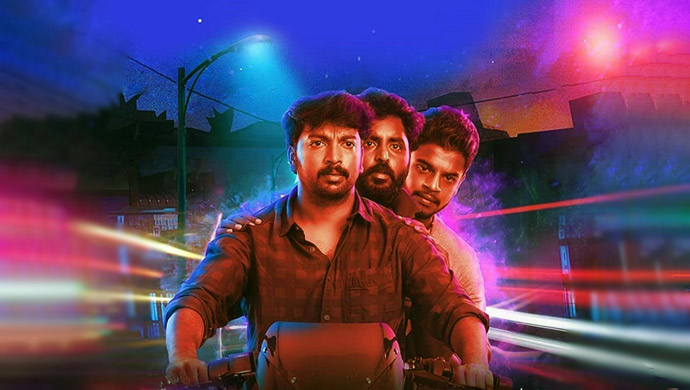 Kalavu streaming on ZEE5 is close-set and gripping. This film is based on a real-life incident and hence it attempts to retain its elements of realism. Also, this Kalaiyarasan and Venkat Prabhu film do a great job of keeping us enthralled in the story. Apart from these leading actors, we all see Karunakaran playing a crucial part in the movie.

Watch the struggle of three youngsters as they try to prove their innocence, in the movie Kalavu.

Speaking of the characters in the movie, Kalaiyarasan plays Sujeeth, one of the central characters of the movie while Venkat Prabhu appears as the police inspector and Karunakaran plays the part of Gautham. Although all these characters have their own depth and qualities, it is Sujeeth who claims our attention in the movie. But let us not deny or ignore the role of Gautham who also has his own narrative in the story.

Sujeeth’s character is not without faults. He is shown as the most affected person in the movie, for almost after the first initial scenes of the movie we have seen more details about the life and problems of Sujeeth. His character is that of a single child who belongs to a conservative family with a middle-class background. Belonging to this section of the society, he has this desire to live a carefree and rebellious life. Like most of us from the middle-class lifestyle but he is also concerned about his family and the money he spends.

It is this concern that somewhere or the other leads him to fall for the issues in the movie. For example, remember the scene where he tries to avoid the cops, who stop him while he is riding with his drunk friends. It is the concern that he would have to pay a fine for drinking and driving that makes him take the rash decision and run away from the scene. Although this was a small incident, it is what changes his life forever.

Do you agree with us? Let us know in the comments below!

If you like watching such thriller stories, check out the lot available on ZEE5.

Half Girlfriend: Watch The Confusion Of Love As It Shifts Between The Unsure Lovers.

5 Reasons Why You Should Watch Mitta Streaming On ZEE5