Will Sathya Come To Know That Divya Is Prabhu’s Fiancée?

Sathya nurtures love for Prabhu in her heart. Her friends know that she loves Prabhu but refrain from telling her that he is engaged to her sister. 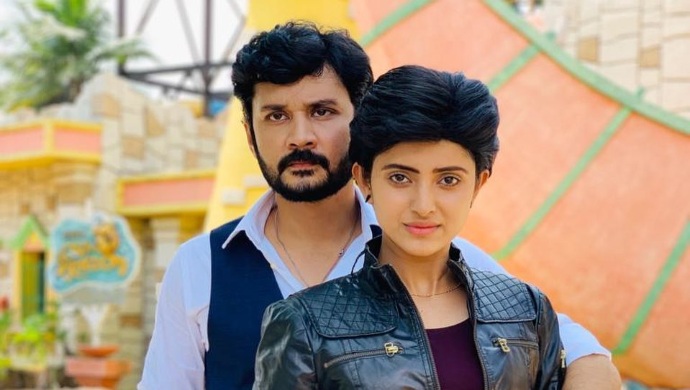 The current track of Sathya (Ayesha) is turning out to be an intriguing one. Sathya is not aware of the fact that the man (Amul Baby aka Prabhu played by Vishnu) she is in love with, is her elder sister Divya’s fiancé. Interestingly, neither Divya nor Prabhu has told her about their engagement. In fact, Prabhu does not even know that his friend Sathya is his fiancée’s sister.

Divya and her family have hidden the fact that they have another member in the family named Sathya. Apparently, they don’t want the groom’s family to know that one of their daughter is tomboyish. For those who joined in late, here’s another piece of information. Divya dumped her boyfriend after knowing that Prabhu hails from an affluent family. She presents Sathya’s horoscope during the match making session and thus impresses Prabhu’s father. However, after the engagement, she comes to know that Sathya is a friend of Prabhu so she tries to dissuade him from meeting her.

Later, when Prabhu’s father visits their family Guruji, he informs them to do the engagement ceremony once again. He realises that something is fishy about Divya. He feels that Divya’s personality and conduct don’t reflect the serenity in the horoscope. So Prabhu and his father visit Divya’s house to tell her family to start preparing for the second engagement ceremony. Divya’s family initially hesitate but eventually agree.

Meanwhile, Sathya nurtures love for Prabhu in her heart and waits for it to bloom. Her friends know that she loves Prabhu but refrain from telling her that he is her sister’s fiancé. They try to bring Prabhu closer to Sathya without their knowledge.

But will Sathya come to know that the man she has fallen in love with is going to get married to her sister? For more entertainment, check out the videos of Piriyatha Varam Vendum on ZEE5.