Vennila offers something to Neelambari as a means to appease her. What is she offering? 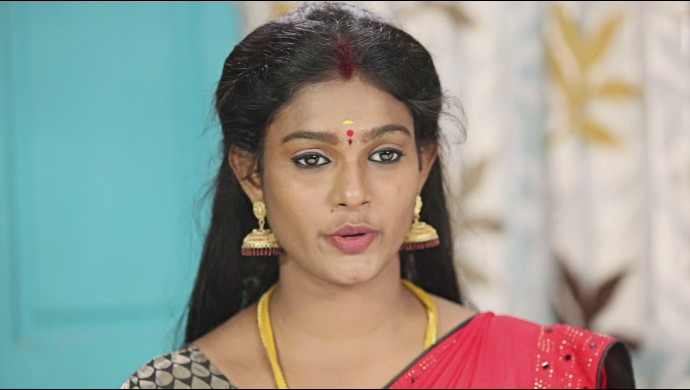 In the previous episode, we saw that Vennila and Mutharasan still manage to go to the movies despite Neelambari attempts to foil it by faking a fainting spell. In the theatre, Mutharasan fights off goons who misbehave with Vennila. Later, the two of them have a private moment by the side of the road eating corn. Mutharasan tells his wife that she must be loving towards Neelambari as she is experiencing disappointment about him not marrying her niece Swetha. He assures her however, that he, Mutharasan is happy in his marriage to Vennila. Later when Vennila tries to be nice to Neelambari and feed her kanji because of her fake illness, Neelambari taunts her and drives her off. The next day, Neelambari is shocked to discover that Mutharasan has called the family lawyer home without even consulting her.

In tonight’s episode, we will see Vennila trying to making a deal with Neelambari. She tells Neelambari that she is willing to sign whatever documents Neelambari places in front of her. This enrages Neelambari who throws a chair. What is Vennila negotiating with Neelambari for? Is it to save her marriage to Mutharasan? To find out, watch Yaaradi Nee Mohini on ZEE5.

If you are new to the series, here´s what you need to know. Mutharasan is a wealthy landowner whose stepmother secretly kills his wife Chithra. The ghost of his wife still hangs around, trying to protect the family. To relieve Mutharasan of his wealth, Neelambari later gets him engaged to her niece, Swetha. Other household members and the rest of the village doesn´t approve of Swetha, especially his cousin Vennila, who has been in love with him all her life. Eventually Swetha´s many, many plans get foiled and Mutharasan is married off to Vennila. However, his problems don´t end there. Due to a spell cast by Swetha, Mutharasan has forgotten that he was once in love with Vennila. After his marriage, he requests Vennila for some time before they initiate physical relationship.