As Vennila and Muthurasan’s compatibility test continues, will she be able to guess his answer in the newlyweds-inspired game? 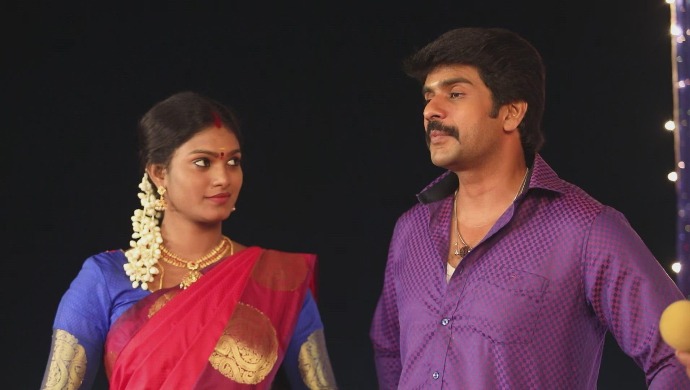 In the previous episode, after the family reunites with Vennila at the mall, they decide to get some dinner together. At the restaurant, Muthurasan meets some of his friends. They apologise for not attending his wedding but invite him over to a party that’s taking place at a hotel rooftop. Muthurasan agrees to drop by and takes Vennila, Janani and the rest, with him. At the party, the host plans some couple games to test their compatibility. Vennila and Muthurasan are also called up on stage where a ‘FLAMES’ test is conducted. Basically, it is a compatibility test where the partner’s role in his/her life is determined.

Tonight, Vennila and Muthurasan are put through another test. A version of the newlyweds game is played where one partner is asked questions while the other has to guess the answer. Here, Muthurasan is asked what he holds dearest in his life. Vennila is supposed to look elsewhere and state the answer that he has written on the board. Their answers are supposed to match. Will Vennila get the right answer? Stay tuned!

Inspired By Vishu Vijay’s Visit To Varanasi, 5 Facts About This Place, You…

Sathya 11 January 2020 Preview: Sathya Hides Under The Bed To Teach Prabhu A Lesson?