After learning that her ancestral home has been sold off, Vennila is heartbroken. Pooja informs Muthurasan about the same. 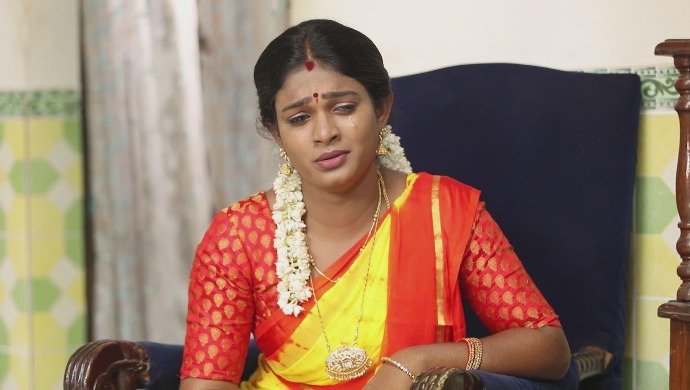 In the previous episode, after Pooja collapses, Muthurasan calls for a doctor while the others take care of her in her room. The doctor then breaks the good news that Pooja and Ashok are expecting a baby. Since this is their first child in five years, they are asked to avoid travelling for a few months. Simran is overjoyed as that means she gets to spend more time with Karthi. Before she can break the news, Vennila goes to him and states that the family will be extending their stay. Once again, Simran tells Karthi in Hindi that she wants to marry him and have his babies.

Tonight, Vennila is in a state of shock to see how her mother and grandmother’s portraits have been pulled down from the house. The landlady arrives and informs Vennila that they are planning to sell the house because they are getting their daughter married and need extra funds. She is crushed to hear that all her memories with her grandmother and mother have been taken away from her. Vennila simply carries all her belongings and portraits back to her house. Pooja tries to console her but she is unable to feel happy or even better.

As Vennila is sitting on a chair, moping about the lost house and the memories with her grandmother and mother, Neelambari and Poongodi ask her to start cooking food. Absentmindedly, Vennila goes to the kitchen, switches on the gas and starts cutting vegetables. What she doesn’t realise is that the gas hasn’t been switched on and the fumes are taking over the house. Luckily, Muthurasan arrives and smells the pungent odour. He quickly switches off the gas and snaps Vennila out of her preoccupation. Muthurasan then asks her what’s bothering her but she doesn’t tell him what’s happening.

Muthurasan then asks Vennila to not switch on the gas for some time because that would flare up the entire house. He is worried about her and asks Arumugan about the same. They are clueless about what’s bothering Vennila and he calls her again to check. But Vennila doesn’t reveal anything and instead states that she will finish with the cooking as soon as possible. Ashok and Pooja notice the entire scene and call Muthurasan to discuss what has happened to Vennila. Pooja then discloses whatever happened at her previous house and why Vennila is sad.

Pooja also brings up the subject of how Neelambari’s behaviour at the temple to receive the honour over Vennila upset her and Ashok. She further adds how Vennila is a good person and doesn’t deserve to be called a servant as she is always looking out for others and takes up duties with a big smile on her face. Ashok and Pooja then ask Muthurasan to help Vennila gain some confidence in her and take good care of herself.

Preview of the next episode: Muthurasan is seen cracking a deal with the owners of Vennila’s house. He states that he will pay them some money in cash and the others in a cheque. Varadan notices everything from the window as Muthurasan hands over the cheque and money to the owners of the house. He basically buys back the house for Vennila’s sake. What will Varadan do with this information? Stay tuned.

Sembaruthi 31 January 2020 Preview: Who Is Stopping Parvathy From Conducting The…

How Does Vicky's Life Turn Chaotic After He Consumes A Therapy Pill? Watch Enakkul Oruvan

Parvathy And Adi's Romantic Moments In Sembaruthi Will Make You Go Weak In The Knees!