Here's what might happen in tonight's episode of Yaaradi Nee Mohini. 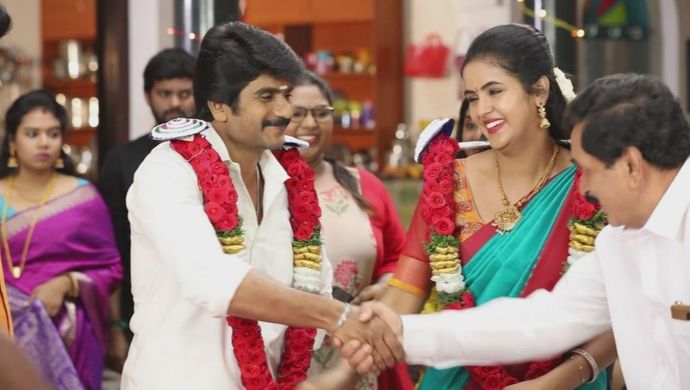 In the last episode, we saw Swetha throwing an open challenge to Annamalai and other family members to try and stop her wedding. She is two steps ahead of everyone. She makes Annamalai and Gautham chase after the wrong person. She convinces Mutharasan also to get married to her without the presence of the villagers since they are against it. Mutharasan wants to marry her legally so he can set aside for Janani her share of the property now that she is married. Vennila is heartbroken over everything that is happening in the house and seeing the love of her life marrying someone else.

Watch the previous episode of the show right here, in case you missed it.

In the upcoming episode of the show, Mutharasan and Swetha exchange garlands. They also sign the register to make their marriage legal. But we saw in the last episode how one of the crows who attack the two officers flies away with a stamp. Will this postpone or ruin the wedding? Or will Swetha succeed in her plans to marry Mutharasan and acquire rights over his property. Will Chitra’s spirit stop the wedding? To know more, log into ZEE5 to catch the whole episode of Yaaradi Nee Mohini when it airs today evening

For the ones who missed the last couple of episodes, Mutharasan has no memory of promising Vennila that he will marry her and he decides to marry Swetha. However, the villagers and some of the family members are against it. He also has a nine-year-old daughter, Rudra, who is very fond of Vennila and does not like Swetha. Although she plots to claim her right over the property eventually, unknown to her, Chitra’s spirit foils her plans all the time. For more such entertainment, watch Nachiyarpuram, the story of a couple who have to fight an age-old family rivalry to get together, streaming on ZEE5.

Sathya 11 October 2019 Preview: Will Prabhu Confess Everything To Divya And Sathya?

Did You Know Pragya And Tanu from Iniya Iru Malargal Are Close Friends In Real Life?