Neelambari accuses Vennila and tells her that she is trying to make Mutharasan forget about Swetha. 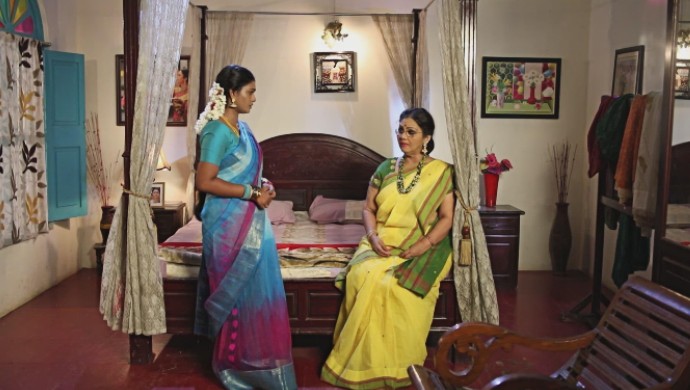 In the previous episode, we saw Vennila going to the mills run by Mutharasan. There he tells Vennila that now that she is the owner’s wife, she is also a head of the business in her own right. He tells her to learn the accounts related to mill operations and later makes her dispense salaries to the workers. He forewarns her that while she may be charitable at heart, when it comes to business she must be strict and play by the book. When she is dispensing salaries, many of the workers ask for advances. She is initially put in a spot, but she remembers Mutharasan’s instructions and firmly says no. Later she goes to the house of one of the workers who had asked for an advance for son’s education. She pays her the amount from her own pocket and tells her that next time, the woman should ask her privately and in advance. Suddenly she hears Mutharasan’s motorcycle and goes and hides.

In tonight’s episode, Neelambari lashes out at Vennila for the tinkling sound that the golusu on her feet make. She accuses Vennila of deliberately enticing her own husband in order to make him forget about Swetha.

If you are new to the series, here´s what you need to know. Mutharasan is a wealthy landowner whose stepmother secretly kills his wife Chithra. The ghost of his wife still hangs around, trying to protect the family. To relieve Mutharasan of his wealth, Neelambari later gets him engaged to her niece, Swetha. Other household members and the rest of the village doesn´t approve of Swetha, especially his cousin Vennila, who has been in love with him all her life. Eventually Swetha´s many, many plans get foiled and Mutharasan is married off to Vennila. However, his problems don´t end there. Due to a spell cast by Swetha, Mutharasan has forgotten that he was once in love with Vennila. After his marriage, he requests Vennila for some time before they initiate physical relationship.

What Happens When You Wake Up From A Coma After 23 Years? Watch ZEE5 Original Series Postman To Find Out