As Neelambari learns about Muthurasan buying the house for Vennila, she creates a big scene about it at the registrar's office. 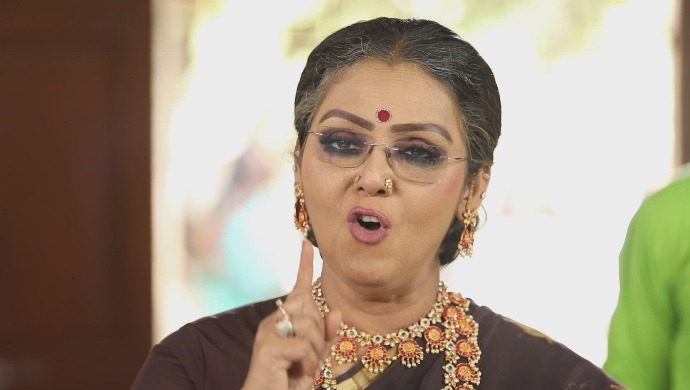 In the previous episode, Muthurasan notices how lost and sad Vennila is as she has lost her ancestral home. To cheer her up, he decides to go and speak to the landlords and try to buy out the house. Even though he knows that the landlord is ripping him off, Muthurasan still buys the house, as it means a lot to Vennila. Varadan witnesses the whole deal. He decides to inform Neelambari about the same.

Tonight, Varadan finds out that Muthurasan made a deal with the landlord and immediately rushes to inform Neelambari about it. After learning that Muthurasan is buying a house for Vennila, Neelambari decides to play a game and make him feel terrible about his decision. Everybody is gathered in the hall when Neelambari goes out and speaks to Muthurasan. She makes up a story that Varadan needs some cash as he has snagged a good work-related project. Since Muthurasan just wrote a cheque for the house, he asks Neelambari and Varadan if he can give the money two days later.

Neelambari secretly wants Muthurasan to reveal the truth about how he has bought the house for Vennila. However, Muthurasan avoids telling her about the house and instead keeps requesting for some extra time to figure out the money. Eventually, he doesn’t give them money and asks Varadan to adjust a little and speak to those individuals. If they don’t budge, then he will find a better project for the latter and help him out. Vennila tries to talk Muthurasan and tell him to give back the house but he refuses to do so as it is his gift to her.

Next day, Vennila and Muthurasan head to the registrar to register themselves as the new owners of the house. As they are doing this, Neelambari arrives at the registrar’s office. After finishing, they both turn and notice her. She marches up to them and points at the fact that Muthurasan refused to help his own brother just so that he could buy a house for Vennila. Neelambari then adds how the house isn’t the need of the hour and could have been put on hold. Muthurasan explains how it had to be bought as soon as possible. However, Neelambari continues to express how he considers them outsiders and nothing else. Vennila tells Muthurasan to give up on the house but he doesn’t listen to her.

Vijay Sethupathi As Thiru Unveils The Dark Side Of Skin Trafficking In Sindhubaadh! Watch It Here