Muthurasan ensures that Vennila gets the same muhurtham saree that Poongodi destroyed earlier. How will she react to this gesture? 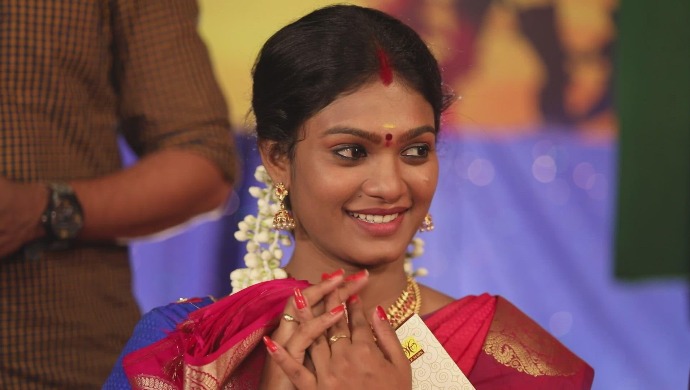 In the previous episode, Muthurasan and Vennila attend an event hosted by Karthi and his friends. The event games include ones that are used to check compatibility among married couples. Eventually, Muthurasan and Vennila are called upon the stage. They manage to ace every game and prove that they make a strong jodi. As the night comes to an end and a last game is supposed to be played, Vennila shows apprehension. However, Janani and the others manage to convince her to play the game, for Muthurasan’s sake.

Tonight, as the events conclude, Muthurasan hands Vennila a mysterious box. She opens the box and finds a yellow and pink saree inside it. Instantly, she is reminded of her muhurtham saree, which was destroyed by Poongodi. One of the men from the audience, informs her that Muthurasan went through a lot of stores, to find a replica of the saree that she lost. Vennila is touched by this gesture of Muthurasan’s. She thanks everyone around for giving her something so precious. How will Neelambari react to this though? Will she throw a fit? Stay tuned!

Appani Sarath Is Horrifying As The Heinous Criminal In Auto Shankar!

Sembaruthi 13 January 2020 Preview: Why Is Akhila Visiting Parvathy At Her Place?