Muthurasan tries to appease Neelambari by giving her the house papers. However, she throws the papers on the floor and locks herself. 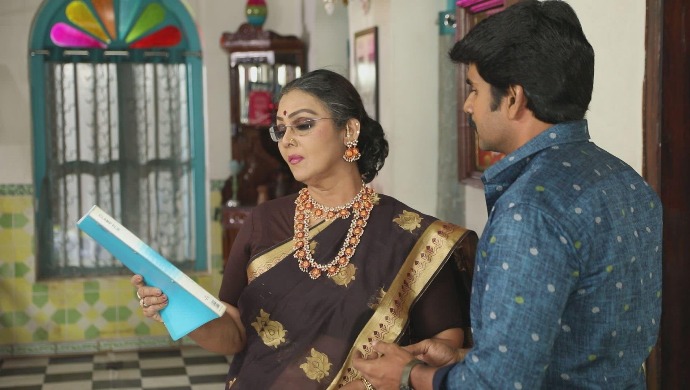 In the previous episode, Neelambari finds out about the house that Muthurasan purchased for Vennila. She gets very upset and creates a scene at the registrar’s office. She asks him to give up on the house as it is not more important than his family. However, Muthurasan refuses to let the house go as he wants to do this for Vennila. He signs the paper along with Vennila and then goes back home, only to find that Neelambari has locked herself in her room.

Tonight, Muthurasan stands outside Neelambari’s room with a hope to chat with her. However, she refuses to open the door and even entertain him. Muthurasan breaks down and cries, stating that he doesn’t want her to think that he has done something behind her back. Vennila comes to him and tells him that he should give away the house as it is not important to her. But Muthurasan doesn’t want to hurt her again and hence, chooses to keep the papers with him. Failing to meet with Neelambari, Muthurasan asks Vennila to keep the papers in their cupboard.

As they are leaving, Neelambari opens the door. She then points at how he asked Vennila to keep the house documents in their cupboard. Muthurasan tries to clear her misunderstanding. But Neelambari makes matters worse by declaring that she knew that the cupboard will only bring more differences in the family. She basically accuses him of separating the family by dividing the wealth. Muthurasan is shocked and tries to explain that he is doing no such thing. However, she refuses to hear him out. Eventually, he hands over the papers to her and tells her to keep it in her room. But Neelambari throws the papers on the floor.

Muthurasan cries incessantly while Vennila and the others feel terrible. Neelambari once again goes back to her room and locks herself. Simran asks Karthi to pick the papers and give them to Vennila. He is hesitant as that would mean disrespecting Neelambari. But Simran coaxes him to pick them up. Finally, Pooja picks the papers from the floor and hands it over to Vennila. She asks her to keep the papers in her cupboard. Vennila refuses to do it as that would mean proving Neelambari’s accusations true.

Preview of the next episode: Muthurasan is standing outside Neelambari’s room, asking her to come out for dinner. However, she doesn’t open the door and continues to maintain her silence. This behaviour hurts him a lot and he too decides to quit food and not have any, till Neelambari has some. Even Vennila and the others decide to go on a food strike. Will Neelambari budge from her decision? Stay tuned!

How Will Aadi Reunite Two Families In Vantha Rajavathaan Varuven?

Chaitra Reddy, Shivani Narayan: TV Stars Show You How You Can Embrace Singlehood!