Are the coins a warning from Chitra's spirit? 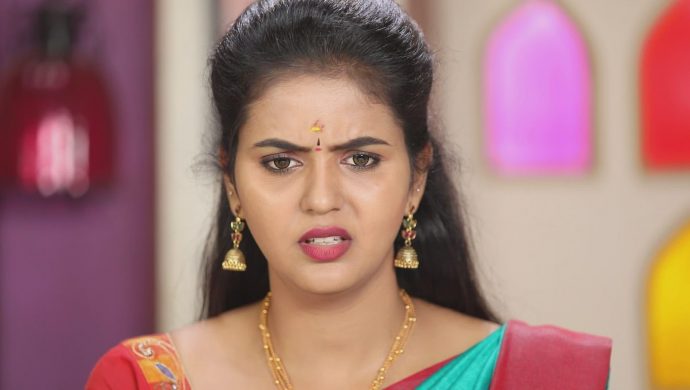 In the previous episode, we saw that Swetha storms into her room fuming over the failure of her plan. She is upset that her marriage to Mutharasan is not valid anymore. She curses everything in sight while her friends try to calm her down. Meanwhile, Annamalai, Gautham and the villagers are celebrating her defeat. Swetha asks her friends to get her a bridal trousseau and decides to look at it every day so the universe conspires to get her married to Mutharasan. An angry Swetha also decides to toss the devotional coin to see if God is on her side. Her friends advise against it but she doesn’t listen.

Watch the previous episode of the show here, in case you missed it.

In the upcoming episode, Swetha is baffled to see three coins appear out of nowhere after she tossed one to see the verdict. Her friends are also equally shocked and scared on seeing this. Is this a sign that Swetha will never marry Mutharasan? Will Chitra’s spirit warn her about her future or is the magical coin testing her? To know more, watch Yaaradi Nee Mohini when it airs on ZEE5 tonight.

For the unversed, Swetha plans to stay two steps ahead of everyone by marrying Mutharasan legally and acquire all his property. Vennila, who is originally supposed to marry him, is left heartbroken on seeing the love of her life marry someone else. However, things don’t go as per Swetha’s plans. Will we see Vennila and Mutharasan’s wedding soon? For more such entertainment and family drama, watch Sembaruthi streaming on ZEE5.