Who will Mutharasan marry finally? 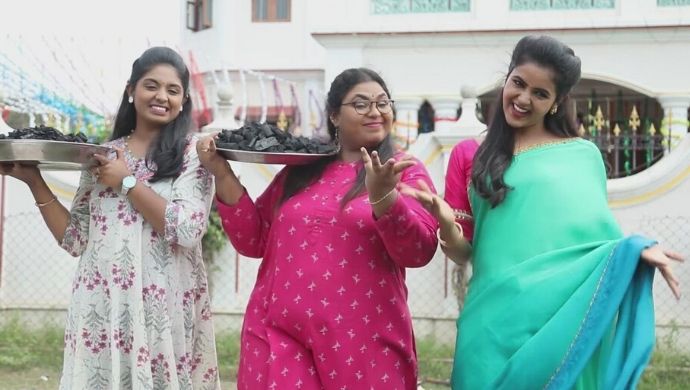 In the previous episode, the villagers get Vennila to perform certain rituals that should ideally be performed by Swetha but Mutharasan lets it go. However, Poongudi and other family members raise an issue over this. Nilambari challenges the villagers and tells them that Mutharasan will only marry Swetha and also taunts them for being disloyal to the family that feeds them. At the temple, Swetha asks Vennila if she is looking for Annamalai and shows her the video where Annamalai lost his arm because of Swetha’s goons. Vennila breaks down and promises Swetha that she will leave the village if she spares Annamalai’s life. Swetha makes her write that she was forced to marry Mutharasan and is leaving village because of the pressure.

In the upcoming episode, villagers make preparations to perform bridal rituals with Vennila. Akshaya tells them that Vennila will never return but they are confident that Vennila will definitely come back. Swetha then tells Akshaya that the villagers believe in random things and asks her to let them be. Will Vennila really come back? Or will Swetha end up marrying Mutharasan anyway? To know more, watch Yaaradi Nee Mohini on Zee5 tonight.

For the ones who missed last couple of episodes, Mutharasan’s first wife, Chitra, was killed by his step-mother, Nilambari since she wanted her own kids to acquire the property. Mutharasan also has a daughter named Rudra. He had promised to marry Vennila, who is head over heels in love with him and is also liked by his daughter, Rudra. However, Nilambari brings here niece Swetha into their lives and wants Mutharasan to marry her instead.

Swetha casts a spell on Mutharasan and makes him go against his words. Chitra’s ghost is, however, lurking around and against the wedding because she knows of Swetha’s intentions. She makes sure that the wedding keeps getting postponed every now and then. Mutharasan’s best friend, Annamalai, who thinks of Vennila as his own sister also strives to get Vennila married to Mutharasan since he knows of Swetha’s intentions. In just a day’s time, fate will unfold and you’ll find out whom Mutharasan marries finally in a mega special episode airing on Sunday, November 17 at 9.30 pm on ZEE5.