Here's what happened in the recent episode of Yaaradi Nee Mohini. 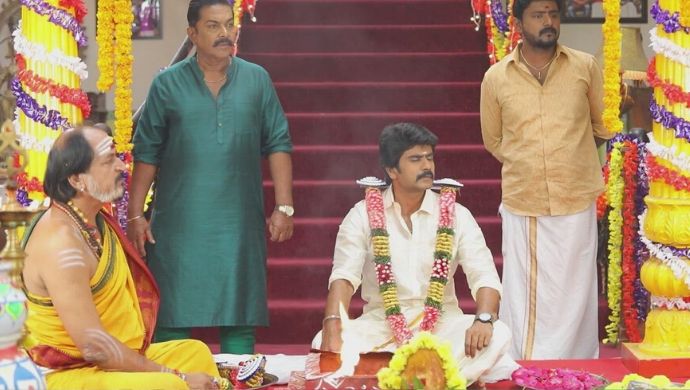 In the previous episode, Vennila decides to leave the village and Mutharasan’s family alone after Swetha showed her the video of Annamalai losing his arm. The villagers, however, are very positive that Vennila will come back and marry Mutharasan, too. Swetha mocks them for their belief and tells them that Vennila will never come back no matter what. Mutharasan leaves to look for Vennila when he finds out that she is missing.

The villagers wait until sunset for Vennila and Swetha also sits there and mocks them. Just as they began to lose hope, Vennila comes back with Annamalai. In some time, Mutharasan also comes back and is relieved to see Vennila back. He asks her where she was, sees Annamalai and asks what’s wrong with his hand. However, Annamalai refuses to answer his questions and orders him to marry Vennila. She also tells Mutharasan that unless he ties the thaali around Swetha’s neck, she will keep her hopes up.

Swetha gives Mutharasan sleeping pills and tells him that she wants him to have a sound sleep and be fresh when he wakes up for the wedding. She then calls bouncers and makes a lot of hectic arrangements outside the house. Annamalai asks Rudra to get into the house and see if she can talk to Mutharasan and create a diversion so they can get Raja to reveal the truth to Mutharasan. But Swetha not only pinches Rudra’s cheek, she also ties her up. Swetha tortures Rudra and asks Chitra to appear. She also uses a certain object she got to keep Chitra away and destroy her. Chitra appears and tries to attack Swetha but the device only harms her instead.

Rudra then knocks it out of Swetha’s hands and it falls. Before Swetha could pick it back up, Chitra possesses her. Meanwhile, Swetha’s goons tie up Annamalai and Vennila at a roof top and set up a screen there so they can catch the wedding live and be tortured. Swetha, who has been possessed by Chitra, beats all the goons up and asks Annamalai to tie her up instead. He is overwhelmed to see Chitra, who tells him that she will not rest in peace until Mutharasan finds out the truth about Nilambari and Swetha.

He also makes Swetha say in a video that she has committed a lot of sins to marry Mutharasan and she is not right for him. While saying all of this, Swetha is busy trying to untie herself with a blade. While everyone is looking for Swetha and wondering where she has disappeared to, Gautham plays the video of Swetha and Mutharasan is upset by it. Rudra also tells him that Swetha treats her badly. Mutharasan then decides to marry Vennila, much to Nilambari’s disappointment. Vennila happily sits on the mandapam with him and successfully marries him.

On the other hand, Swetha unties herself, beats Annamalai up with a piece of log and runs. Annamalai chases her and shoots her several times. She falls on the ground and so does he after shooting her.

Nayanthara Birthday Special: 3 Movies Of The Lady Superstar That You Can Watch

World Television Day: 3 All Time Favourite Marumagals On Telly And What They Are Up To Now