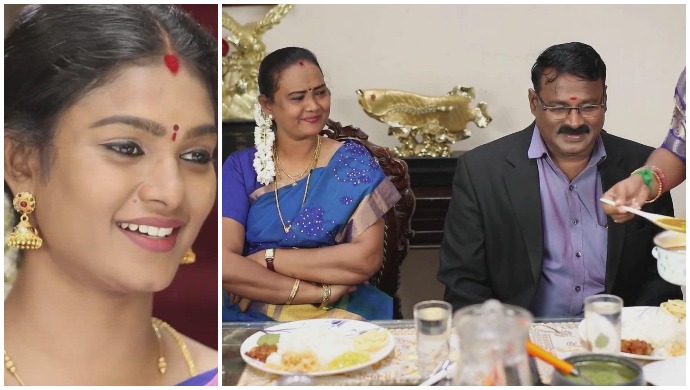 In the previous episode, we saw Neelambari humiliating Venilla in front of everyone for not trying enough to convince her to attend the house-warming ceremony. Also, when she notices that Venilla did not show any courtesy by bringing her a glass of milk from the celebration, she lashes out at her for the same. However, a scared Venilla rushes to the kitchen to prepare milk for Neelambari, and in the process, twists her leg. Despite being in immense pain, she still prepares milk to avoid further drama.

In tonight’s episode, Neelambari warns Venilla to be on her best behavior and that she should abide by all rules. Meanwhile, Muthurasan shows his lands to one of his business friends, who is interested in buying one. After work, when the couple, who are also family friends, tells Muthurasan that they shall now head to their village, the latter invites them for lunch to his house. He calls Venilla and asks her to prepare lunch for the guests.

Venilla gets worried about preparing enough food for the guests in such short notice and panics. However, she manages to cook enough items to impress her husband (Muthurasan) and his friends. The couple not only appreciates her but is also pretty impressed by her cooking prowess. The lady even suggests that Venilla should participate in a cooking show. She also asks her to give her the secret recipe so that she could review Vennila’s food on her YouTube channel. Muthurasan feels proud when his wife gets appreciated by his business friends.

What do you think of tonight’s episode? Share your thoughts in the comment section below. Also, watch Tamil horror movie Lisa, starring Anjali on ZEE5.

Mahashivaratri 2020: 5 Delicious Dishes That You Can Try To Break Your Fast