Venilla shoots for a video, where she can be seen cooking a dish, to qualify for the cooking contest. 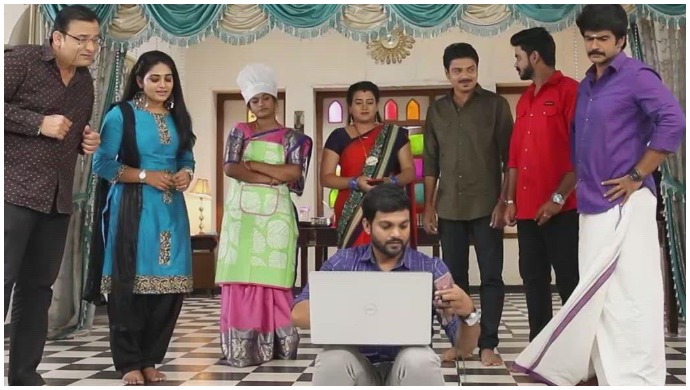 In the previous episode Yaaradi Nee Mohini, we see Muthurasan’s friends, who had come over for lunch, appreciating Venilla for the amazing food that she had cooked at such short notice. The lady, who is a food critic and has a YouTube channel, asks Venilla to reveal her secret recipe of such delicious dishes as she wants to review them on her channel. However, Venilla does not take her suggestion seriously. But Muthurasan definitely felt proud of his wife when the couple/ friends appreciated Venilla.

In tonight’s episode, Venilla considers participating in the cooking competition after Pooja and Karthik force her to do so. Pooja also calls the event organiser to understand how to apply for the contest. She learns that to get shortlisted for the competition, she has to shoot for a video, where she will be seen cooking a dish. So they get her dressed as a chef with an apron, for the shoot.

As the entire family is busy shooting, Neelambari gets irritated with the fact that everyone is only concerned about Venilla and her happiness. However, when Muthurasan asks her if she is fine with all these arrangements made for Venilla, she responds with a sarcastic comment and walks away. Later, the entire family is excited about Venilla’s video being uploaded on the official website of the organiser and wait for it to get a nod and shortlisted.

What Does Sembaruthi’s Aishwarya Have To Say About Karma? Check Post

What do you think of tonight’s episode? Do you think, Venilla will get shortlisted for the cooking contest? Share your thoughts in the comment section below. Also, watch Tamil dramas and films on ZEE5.