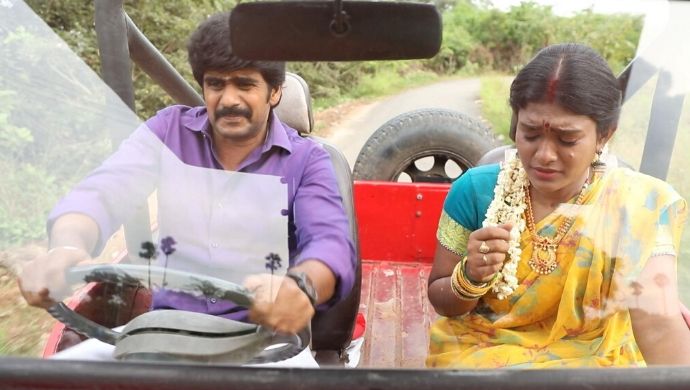 In the previous episode, Janani is disappointed on finding out that Vennila and Mutharasan did not spend their wedding night like other couple do. Janani and Gautham are also disappointed since they decided to celebrate their wedding night only after Mutharasan-Vennila do. Vennila tells Janani that Mutharasan is very stressed right now and whenever he feels like it or whenever he is ready to own the relationship, they will do so and she will wait for him. The men also try to get details from Mutharasan but he leaves everyone puzzled.

In the upcoming episode, Mutharasan and Vennila are going somewhere in the jeep when he realises that he is not able to hit the brakes. He starts panicking a little bit and Vennila also starts panicking when he tells her that there is something wrong with the brakes. He asks her to hold on to something and almost crashes into something. Will this accident amp up the missing romance in their life? Or will they be in grave danger after it? To know more, watch Yaaradi Nee Mohini that airs on ZEE5 tonight.

For the unversed, Mutharasan loses his first wife, Chitra, to an accident which is actually a well-planned murder by his step-mother, Nilambari. She decides to get him married to her niece, Swetha to acquire all the property. Chitra’s ghost lurks around and stops it from happening. Meanwhile, Vennila is also in love with Mutharasan and wishes to marry him.

Sembaruthi 22 November 2019 Preview: Nandini To Get Mithra To Bribe The Workers