Poongodi tells Venilla that she should not leave her husband in this condition and go for the contest. Find out if she manages to reach the venue? 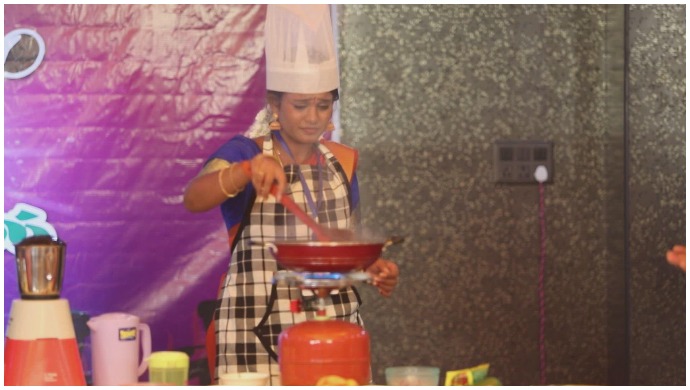 In the previous episode of Yaaradi Nee Mohini, we see Muthurasan becoming a victim of the trap laid by Neelambari for Venilla and falling sick. But he tries to hide this from Venilla because if she finds out, she will cancel the plan of attending the cooking contest and will stay home to take care of her husband. So, Pooja and Ashok too, help Muthu in hiding this from Venilla.

In tonight’s episode, Neelambari lashes out at Vennila for not showing any concern for her ill husband and that she is busy getting ready for the competition. While Muthurasan supports her, Neelambari ensures that Venilla is guilty enough to cancel the plan. However, Muthurasan convinces Venilla and gets her to promise him that she will attend the cooking competition. But when Venilla leaves for the contest with Pooja, Poongodi stops them.

Poongodi tells Venilla that she should not leave her husband in this condition and go for some cooking contest. It is not right of her to do that. When Venilla tells her about the promise she made, Poongodi still tries to convince her. But Venilla leaves nonetheless. Hence, Poongodi’s husband calls his men to cook up a story of an accident but also tells them that it should not appear too serious either. When Poongodi questions him about this, he tells her that Venilla must be alive to sign the will in their name eventually.

Priya Raman As Akhilandeshwari In Sembaruthi Is An Inspiration To Many, Here’s…

What do you think of tonight’s episode? Will Venilla attend the cooking contest? Share your thoughts in the comment section below. Also, watch Vikram and Nayanthara’s Iru Mugan on ZEE5.