Neelambari promises Maruthu that she will get him the money for his business but will Muthu agree to this as it is his money. Read the full update. 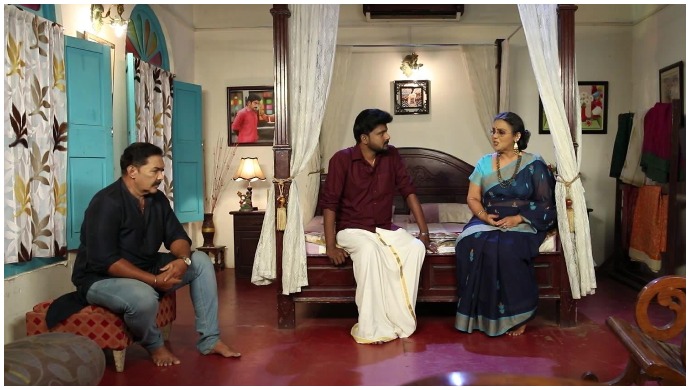 In the previous episode of Yaaradi Nee Mohini, a con couple, wanted by the police, enters the village. They bump into Maruthu and gets to know that he belongs to a rich family. So, they decide to dupe Maruthu. They tactfully invite Maruthu over to their hotel and tell him that they are into the import-export business. To make Maruthu believe, they arrange a man to act like he has come to make a deal with them. When he offers them money the lady refuses to take it or do business with him just because he wasn’t punctual. Maruthu, who sees all this drama gets convinced.

In tonight’s episode, greedy Maruthu asks Madhavi whether she would like to do business with her. He offers to invest Rs 50 lakhs. The con woman immediately agrees. She says that she would happily work with him because not only is he rich but he is an honest man too. Then Maruthu tells everything to Neelambari about the couple he met and also expresses his desire to do business with them. He asks Neelambari for money to invest in the business. While Neelambari becomes doubtful, Maruthu convinces her by saying that they can earn in crores. She then tells him that she will have to discuss this with Muthurasan since it is his money and he needs to say be fine with this idea.

Muthurasan, who did not sell Vennila’s gold but had only kept in the bank for Rs 5 lakh loan, withdraws it and returns her. Vennila then tells him about Simran and Karthik’s affair, Muthurasan assures her that he will talk to Neelambari at the right time. Poongodi, overhears Muthurasan and Vennila’s conversation, informs Neelambari about it. Hearing this, Neelambari tells Maruthu that she will use this opportunity to get money from Muthu for his business. On the other hand, Muthurasan, who promised Vennila that he will take care of Karthik and Simran’s affair, asks Pooja and Ashok to come upstairs for an important discussion. He also asks Karthik and Simran to join them.

If you are new to the series, here’s all you need to know about it. Muthurasan is a wealthy landowner whose stepmother, Neelambari, has killed his first wife Chithra. While Chithra is dead, her spirit continues to stay by Muthurasan’s side to protect him and the family from all the evils. Neelambari is set on acquiring Muthurasan’s wealth. Hence, she tries to get him to marry her niece, Swetha, who casts a spell on Mutharasan to make him forget his love for Vennila. Eventually, Swetha’s plans fail and Muthurasan gets married to his cousin Vennila. But the spell is still in effect and he is not entirely convinced about Swetha being evil. So, on the first night after their marriage, he requests Vennila to give him some time, before they can take their relationship to the next level. And now when Muthurasan finally has developed feelings for Vennila, Swetha, who was missing ever since their wedding night, is now back into their lives. We wonder what plan does she have in store for the two.

If you would like to watch more such shows, check out Iniya Iru Malargal, now streaming on ZEE5.