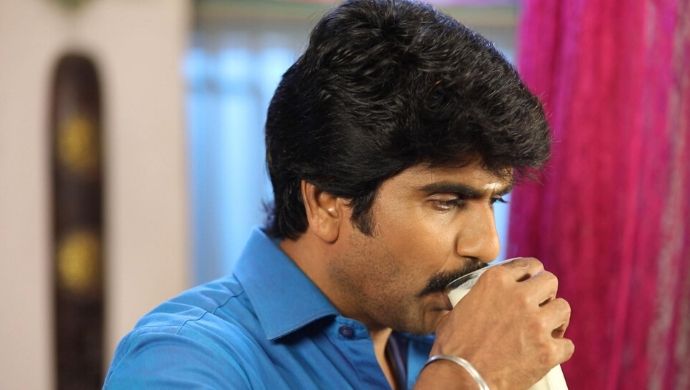 In the previous episode, Vennila wakes up to find Mutharasan rubbing balm on her feet after seeing her in pain. She gets up and asks him to let it go but he does not listen. She gets emotional on seeing Mutharasan care about her. They share a cute moment together before he goes back to sleep. Gautham and Janani ask Vennila, the next day, about why she is in such a good mood. She tells them everything that happened and leaves Gautham frustrated. Later on, Nilambari and Mutharasan go through Swetha’s things hoping to find a clue but in vain.

In the upcoming episode, Janani fills 5 glasses of milk for everyone so they can have it before going to sleep. Gautham adds a pill in Mutharasan’s glass and tells Janani that it will definitely spice up his romantic life. They excitedly leave but run into Azhagappan, who volunteers to give Mutharasan the glass. However, Rudra also changes the glasses and there are high chances that she has misplaced the one with the pill. Will Gautham end up drinking the milk that’s meant for Mutharasan? To know more, watch Yaaradi Nee Mohini on Zee5 tonight.

For the ones who missed the last couple of episodes, Nilambari kills Chitra, who is her stepson Mutharasan’s beloved wife. She plans to get him married to her niece Swetha but he also promises Vennila that he will marry her. Chitra’s ghost makes sure that his wedding with Swetha never happens.