Yaaradi Nee Mohini: Mutharasan Slaps Swetha In The Presence Of The Villagers

Mutharasan shall slap Swetha in the presence of the villagers, who have visited his mansion at Venila's behest to mend broken fences. 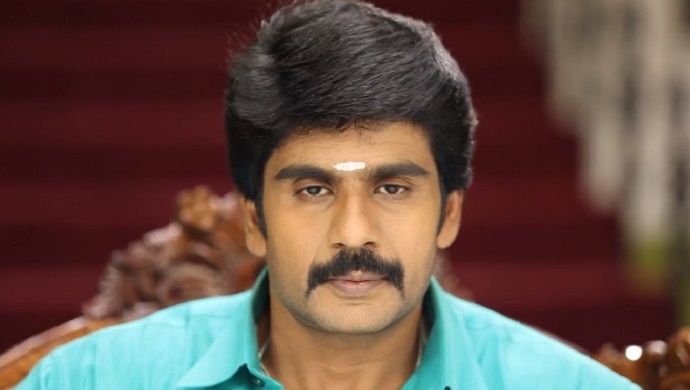 In today’s episode of Yaaradi Nee Mohini, you will be happy to see Mutharasan slapping Swetha. Yes, Mutharasan shall slap Swetha in the presence of the villagers, who have visited his mansion at Venila’s behest to mend broken fences. To know why Mutharasan hits Swetha, you will have to watch the episode tonight, but here’s a little summary for those who missed the last few episodes.

Swetha tried to create hurdles for Mutharasan as he walked barefoot to the temple while carrying his sisters Janani and Poongodai on his shoulders. He did the penance to ward off evil from the horoscopes of their life partner. However, Swetha failed in her attempts to ruin Mutharasan’s penance. Later, Janani, learnt that Swetha had a role to play in disrupting the ritual. She tells Vennila to fight for her rights because everyone wants her to marry Mutharasan. She makes Vennila realise that Mutharasan’s life will get ruined if he marries Swetha. Hence, Janani asserts that Vennila must do something at the earliest to stop Swetha from succeeding in her evil mission.

VJ Kathir Aka Arun Of Sembaruthi Is A Motorcycle Enthusiast, Here’s Proof

Ashwini Radha Krishna Is A Total Foodie, These Posts Are Proof

Hence for the first time, Vennila makes an initiative to do something that would elevate her position in Mutharasan’s life. She reaches out to the villagers and tells them to mend broken fences. She knows that without their love and support, it will be difficult to stop Swetha. Thus, she asks them to take part in Janani’s wedding ceremony. Will Vennila be able to defeat Swetha and end the ruckus that she creates time and again? How will things unfold hereafter? And how will Swetha react after getting slapped by Mutharasan? Keep showering love on Yaaradi Nee Mohini, and for more entertainment, check out Poove Poochoodava, the unusal love story of a married couple, on ZEE5.