Yaaradi Nee Mohini: Mutharasan’s Hand Bleeds As He Carries His Sisters On A Balance Scale

Karthi, who is not aware of Swetha's dirty tricks, makes Mutharasan have the spiked coconut water. Will Mutharasan fall unconscious after drinking it? 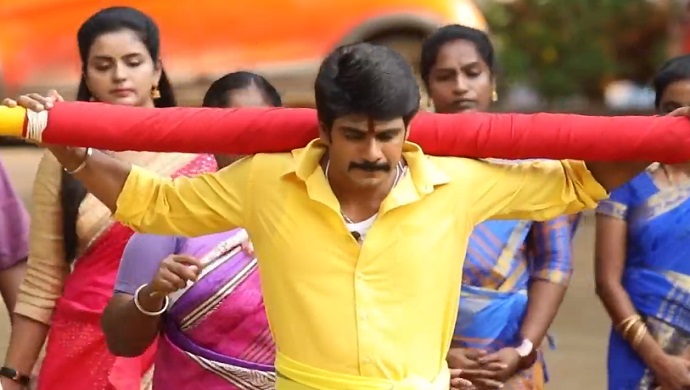 Mutharasan proves time and again that he is a fine human being. He is caring, supportive and generous. To ensure that his half-sisters Janani and Poongodai have a happy married life, Mutharasan endures the pain of carrying them on their shoulder as they remain seated in the baskets on either side of the weighing scale. In yesterday’s episode, we saw how Swetha cut the rope of Janani’s basket with a blade to ruin Mutharasan’s efforts. And today, his hand starts bleeding as he holds the rope tightly even as he balances the scale.

But the trouble doesn’t end there. Karthi, who is not aware of Swetha’s dirty tricks, makes Mutharasan have the spiked coconut water. Will Mutharasan fall unconscious after drinking it? Will his efforts go down the drain? For the unversed, the priest who went through Goutham and Azhagappan’s horoscope revealed the two of them have Dosha. Hence, to rid them of the dosha, the eldest male family member must perform a ritual. He asks Mutharasan to perform a penance by carrying his sisters Janani and Poongodai on his shoulders as they remain seated in two baskets. He is expected to carry them and walk barefoot from his house to the temple.

Swetha, who wishes to ruin Janani and Goutham’s wedding, hatches a plan disrupt Mutharasan’s penance. First, she cuts the rope with a blade and then spikes the coconut water meant for his consumption. It will be interesting to see whether or not Swetha succeeds in her evil attempt. Watch Yaaradi Nee Mohini to know what happens hereafter and for more entertainment, check out Sathya, the love story of a tomboyish girl, on ZEE5.

Daughter's Day 2019: Things You Can Learn From Parvathy, Sathya, Shakthi And Rudra

Sathya Learns How To Make Kolam To Impress Her Amul Baby