Yaaradi Nee Mohini: Swetha To Prove That She Has Divine Powers Like Vennila?

In today's episode, you will see Swetha implementing Akhaya's plan by dressing like a god-woman. 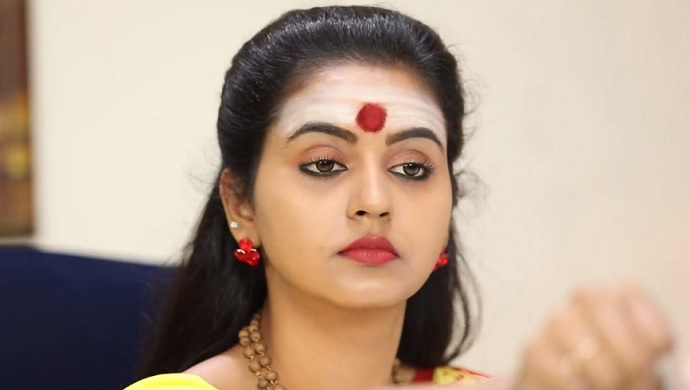 No matter what Swetha does, only Vennila becomes a recipient of people’s love, admiration and support. After realising that people worship Vennila and think she is blessed with divine powers, Swetha decides to do something to grab all the limelight. Her friend, Akshaya, who has been one of her most-trusted aides, suggests an idea to her. Akshaya tells Swetha to pose as a god-woman to fool people.

In today’s episode, you will see Swetha implementing Akhaya’s plan by dressing like a god-woman. She wishes to ape Vennila by doing things when people reach out to her for help. So, Swetha wants to impress people by proving that her body becomes the abode of the Goddess and her blessings can heal people of illness and relieve them of other problems.

But will Swetha be able to succeed in fooling people? In yesterday’s episode, we saw how Maruthu bribed an old woman to spread the fake news about Swetha being blessed with the powers of the Goddess. The news spreads like wildfire and people line up outside Mutharasan’s mansion to seek her blessings.

However, it will be interesting to see if Annamalai chalks out a plan to ruin Swetha’s efforts? For the unversed, the villagers expressed their desire to see Vennila get married to Mutharasan. They believe that only the girl who performs the Kanni Puja is entitled to marry the zamindar. But Mutharasan rejects the idea stating that he has promised his step-mother that he would only marry Swetha. The villagers, who are upset with Mutharasan’s decision, leave his house without having the food that is served.

How Does Tailor Thangaraj Play An Important Part In The Love Story In Pyaar Prema Kaadhal?