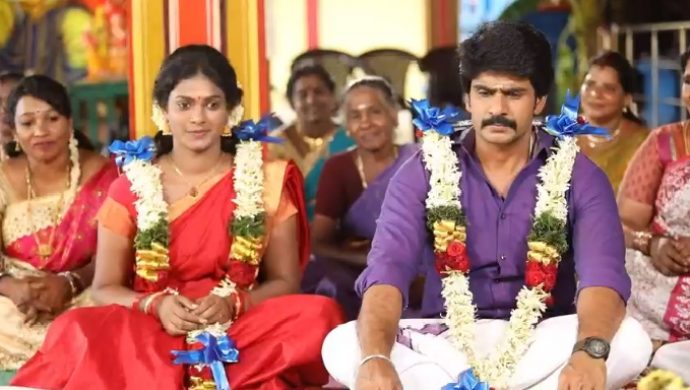 What is destined to happen will happen, no matter what people do to evade it. Swetha of Yaaradi Nee Mohini, is not at peace with herself primarily because she refuses to accept reality as it is. And to get what she wants, she does things that are only worthy of condemnation. In yesterday’s episode, we saw how in spite of hiring goons, Swetha couldn’t kill Annamalai, a genuine well-wisher of Vennila and Mutharasan. In the end, Vennila and Mutharasan’s engagement takes place, as per God’s will.

In today’s episode, Swetha fumes with rage after seeing Vennila happy. Vennila has the engagement garland around her neck as she thanks Chitra for giving her the courage to visit the temple for the ceremony. She feels indebted to Chitra for giving the happiest moment of her life. Swetha, who secretly listens to Vennila’s expressions of thanks to Chitra, decides to ruin her happiness. She is also furious with the villagers for hailing Vennila.

For the unversed, here’s a summary of the last few episodes. The Guruji (occultist) had gifted a special coin to Swetha and had asked her to toss it up in the air to find the answer to her question. Ahead of the engagement ceremony, Swetha used the coin, asking if she would succeed in stopping the ceremony. When she tosses the coin, calling for heads, it ends up reflecting tales. Maruthu hides the truth from her as he doesn’t want her to get disappointed.

Now, she loses faith in the coin, after not getting the desired results. Moreover, in yesterday’s episode, she had revealed that she would kill herself, is she fails to stop Mutharasan and Vennila’s marriage from taking place. Swetha is on a self-destructive mode, and none can save her. This has already been predicted by Kulanagini.

To know what happens hereafter, watch Yaaradi Nee Mohini, and for more entertainment, check out Sathya, the love story of a tomboyish girl, on ZEE5.

Are Sathya And Prabhu Destined To Marry Each Other?