Yaaradi Nee Mohini: Vennila Tries To Strangulate Swetha After She Insults Her Mother

The golden paper carries Kulanagini's messages to Swetha. She asks Swetha to mend her ways before its too late because Vennila will not spare her. 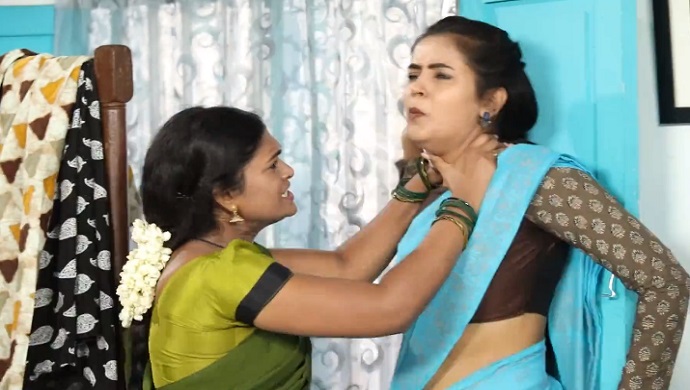 A man’s ego often becomes the primary cause of his downfall, and this stands true for Swetha of Yaaradi Nee Mohini. In spite of repeatedly getting  warned by the Guruji not to interfere in Vennila’s life, Swetha commits the same blunder over and over again. Swetha refuses to leave Vennila alone. She looks for opportunities to humiliate Vennila to satisfy her inflated pride. But Vennila does the unthinkable today.

In today’s episode of Yaaradi Nee Mohini, you will see a brand new avatar of Vennila when Swetha instigates her by name-calling her mother. Vennila, who never retaliates when insulted, fumes with rage after Swetha abuses her mother. She warns Swetha of dire consequences by trying to strangulate her, even as Maruthu, Akshaya and others look on.

For those who joined in late, here’s a flashback to the story. Swetha kills Kulanagini, a well-wisher of Vennila and Annamalai. She takes Maruthu’s help to dispose of Kulanagini’s body at a dumping ground. Maruthu finds a golden piece of paper that he tries to rid himself of it while returning from the dumping field. However, the paper gets blown into Swetha’s room by a powerful breeze. The Guruji asks Swetha not to throw it away, but she doesn’t pay heed to his suggestion. No matter what she does, it returns to her in some way or the other.

The golden paper carries Kulanagini’s messages to Swetha. She asks Swetha to mend her ways before its too late because Vennila will not spare her in the future. She clearly states that Swetha will meet her end at the hands of Vennila.

What will Swetha do now? Continue watching Yaaradi Nee Mohini and see what happens hereafter. And for more entertainment, watch Oru Oorla Oru Rajakumari on ZEE5.

Sathya Finally Proposes To Prabhu, But Will He Reciprocate?