Yaaradi Nee Mohini: Will Goutham Get Trapped In A Fake Murder Case?

As Goutham narrates the chain of events, Annamalai wonders why he must surrender when he doesn't even know if the man he stabbed is dead or alive. 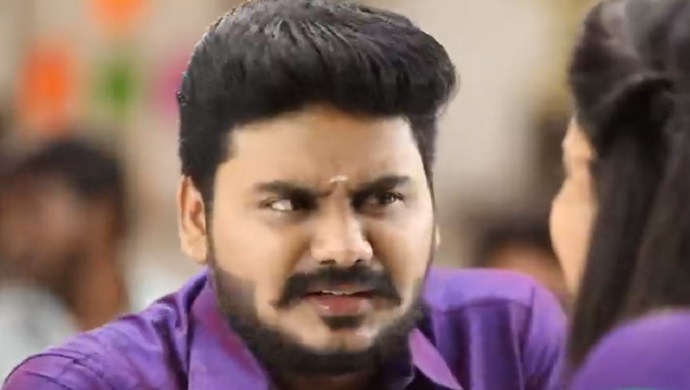 In today’s episode of Yaaradi Nee Mohini, Swetha may have the upper hand. Goutham, who believes he has killed one of his attackers, visits the nearest police station out of guilt and a fear of law to surrender himself. Thankfully, he bumps into Annamalai outside the police station. And as he narrates the chain of events, Annamalai wonders why Goutham must surrender when he doesn’t know if the man he supposedly stabbed is dead or alive.

For the unversed, here’s a summary of the last few episodes. Swetha, who wishes to avenge Janani for humiliating her and heaping praise on Vennila, hatches a plan to trap Goutham in a fake murder case. She asks her aides to help her execute the plan to attack Goutham and in the end compel him to stab one of them. Swetha wants to ruin Janani’s happiness only because she supports Vennila. Janani and Goutham’s wedding ceremony is scheduled to take place shortly, and Swetha deliberately executes her plan ahead of it to stop the wedding ceremony.

Lisaa Review: Anjali’s Horror Drama Will Make You Look At Things From A…

However, the good news is that Vennila has transformed into a confident person with strong will power. Moreover Mutharasan’s childhood friend Annamalai is back in the mansion to prepare for Janani’s wedding celebrations. Will Vennila and Annamalai discover Swetha’s handiwork in the fabricated murder story? Will they be able to save Goutham? Keep watching Yaaradi Nee Mohini to know what happens hereafter and for more entertainment, checkout Piriyadha Varam Vendum, a love story based on reincarnation. The show stars newcomers Vimal Venkatesan, Madhumitha and Priyanka. Watch the show on ZEE5.